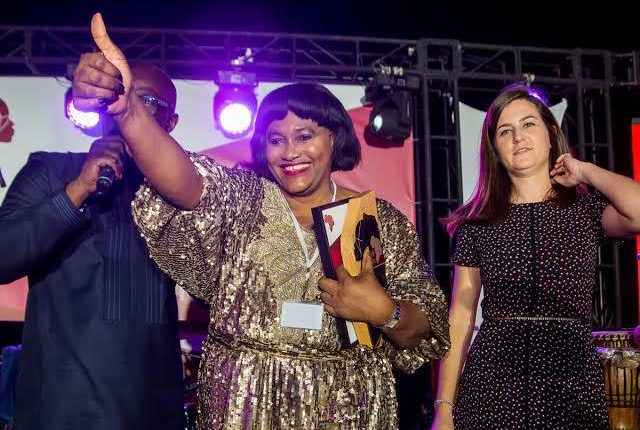 Africa’s Next Super Model is Africa’s prestigious modeling competition reality TV show dedicated to scouting Africa’s finest talent in the modeling industry. It is centered on scouting young girls and boys who have raw talents for modeling and turning them into world-class professional supermodels.

Founder and President of Isis Models Africa and Nigeria’s top super modeling expert, Mrs. Joan Okorodudu, has called for serious attention to be paid to African models and creative talents across the continent, saying young people are the greatest asset in the African creative space, hence should be taken seriously for Africa to develop and compete globally. Mrs. Okorodudu disclosed this when she unveiled the plan for the next edition of the Africa Next Supermodel show which is going to be the biggest model search event in Africa in 2022.

The superlative African modeling and fashion icon, Okorodudu, who is Nigeria’s most traveled fashion and modeling entrepreneur, by partnering with Select Models, the agency is known for building the careers of young models and making them into top models of the world, both super brands are coming together to bring to reality the big dreams of African Ladies to becoming supermodels. Okorodudu said, “Our focus is to raise more young talents across Africa and launch them into the international modeling space”. She went further to hint that ‘black models’ are now most sorted for across the world.

Founded in 1977, Select Model Management is globally recognized as one of the most prestigious and innovative agencies in the model and talent industry. Since its establishment, it has built an exclusive client list of the world’s leading lifestyle brands and has managed the careers of the biggest, brightest, and most successful male and female models and artists.

In 2019, Select merged with MP Management, the world’s fastest-growing global network of model and talent agencies, and had proudly launched the careers of new young faces such as Yoonmi Sun and Shanelle Nyasiase, and worked with established top models including Marjan Jonkman, Arthur Gosse, Adonis Bosso, Gao Jie, and Bar Rafaeli.

Having shaped the model and talent industry for over forty years, Select is now a global model and talent agency that has offices in eight cities across the world: London, Milano, Paris, Stockholm, Atlanta, Chicago, Los Angeles, and Miami. Some of the notable models with Select from Isis models are Anya, Yetunde, Anyiel, Hakima, Awoui, Nyawargak, and Isheja.

The CEO of Select Mr. Matteo Pulgisi will be traveling with the CEO of Isis models Mrs. Joan Okorodudu to Juba, Nairobi, Rwanda, and Burundi for the castings while in Johannesburg, South Africa, casting will be conducted by Stefano of Select Milan and Joan Okorodudu.

Already, the MD of Studio 24 Mr. Ifeanyi Chris Oputa is again fully involved in Africa’s Next Supermodel. Mr. Oputa gave away cars to winners of Nigeria’s Next Supermodel in appreciation for their efforts and encouragement to soar higher in previous editions of the show.

The quintessential supermodel talent legend, Okorodudu, disclosed that the most befitting reward for the winner will be the winner being signed with Isis models Africa as the mother agency and Select models global. For the upcoming models, this reward will be a big break for them in the modeling industry.

With the largest number of African working models from the African continent working in the diaspora as evidenced by over 30 working models on models.com and counting, Joan Okorodudu of Isis models took a brand out of the African continent to the world stage, and the best she says is yet to come. Isis Model Africa is a well-established brand that has offices in Johannesburg, South Africa, Lagos Nigeria, Abuja Nigeria, London, England, Nairobi, and Kenya, and in June 2022 will be opening its office in Kigali Rwanda hopefully.

Select Models is the official partner to Africa’s Next Super Model coming up in Kigali Rwanda on the 26th of November 2022. Having discovered models from all over Africa, Joan Okorodudu is known to book models to some of the biggest brands in the world. She has some of the most amazing scouts and partners across the continent of Africa.

The agency is dedicated to identifying, developing, and sustaining the careers of beautiful black Models. Isis Models Africa is staffed by young, fun, yet experienced, and dedicated team of scouts and bookers with international experience and with the aim of moving the modeling Industry atop of every other in the world.

Joan Okorodudu has made it her mission to “change a life”. The Isis Models brand is not for financial gain as her humanitarian services have never for once excluded Young boys and girls aspiring to take up modeling, professionally, and as such have become beneficiaries of her large golden heart of Mrs. Okorodudu while fulfilling their dreams. Recently, we have heard and seen young models who were in Kakuma Refugee Camp in Kenya now top models courtesy of Isis Models Africa.

Arguably Africa’s biggest Modeling Agency, Isis models have propelled young men’s and women’s careers to the top of the modeling map. The models who have worked for top brands of the world come from all parts of the African continent. Isis models have also been the agency with the highest number of girls on Vogue covers, and other cover magazines. As it is now, the sky is only but the beginning for this modeling brand as it continues to elevate lives and bring dreams to life.

Accolades to Darell as he set to launch his album

2023: I will seek for Ghana Citizenship if Atiku , Tinubu wins – Charly Boy

Accolades to Darell as he set to launch his album

2023: I will seek for Ghana Citizenship if Atiku , Tinubu…