Integrity Group, others attack me for mobilising traders for Soludo – Anambra Market Commissioner 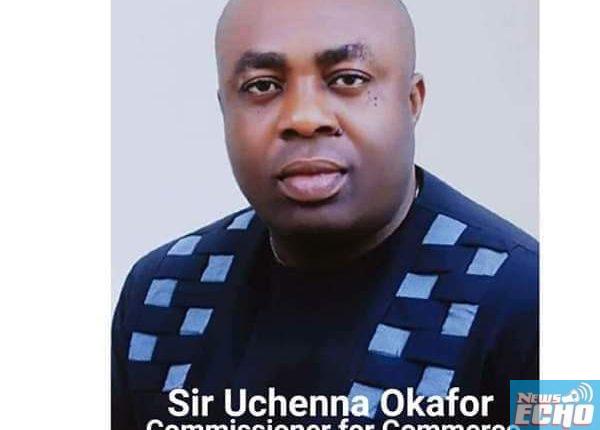 The Anambra State Commissioner for Trade, Commerce, Markets and Wealth Creation, Hon. Uchenna Okafor, has hinted that he was being attacked by Integrity Group, that claimed to be representatives of traders in the state and political opponents because he was able to mobilise traders that gave 95 per cent votes to the Governor-elect, Prof. Chukwuma Charles Soludo during the November 6 gubernatorial election in the state.

Reiterating that he has no regret for what he did, the Commissioner said that he restored peace in all the markets which prompted enemies of progress in the markets like the Integrity Group and political opponents to attack him and called for his sack to enable them continue in their selfish interest as they thrive in crises.

“The allegations the Integrity Group levelled against me are false, baseless and a figment of their own imagination. The group has no fixed address and phone number, they are faceless and I want to tell the people that the sponsors were not able to mobilise to vote for Soludo like I did and it was part of why I am being attacked”

“They alleged that the Bridge head market was excluded from the January 4th reopening of all markets because of shops that are being built there of which they accused me of taking bribe and collection of #2million from each shop. It is fallacy, no shops are being built there rather a modern abattoir and the project is being constructed by the Ministry of Agriculture”.

The Commissioner who spoke to newsmen through the Permanent Secretary, Ministry of Trade and Commerce, Mr. ike Samuel, added that, “their aim is to stop the people from voting en mass to the Commissioner who is sure of victory come 2023 general election as his achievements will speak for him”

In a swift reaction when contacted, the Integrity Group chairman, Mr. Obinna Madu and secretary, Onyeka Udeogalanya, maintained that, “it is because of building of shops at bridgehead marrket that all markets reopened on 4th January except Bridge head market that reopened on 11th January this year”

“The illegal activities of the Commissioner especially in the markets gave birth to Integrity Group to enable the traders express their feelings to government and general public.

“We urge the state government to set up an independent investigative team to investigate our claims against the Commissioner or we will petition EFCC” the group vowed.

The group vowed also that, “if APGA gives ticket to the Commissioner for his House of Representatives ambition he will lose because he thrives on crisis and sycophancy”

“Government should know that he thrives in collection of illegal park money and revenue on the roads.”

“It was in the time of former Commissioner or Transport, Christian Madubuko, that it was discovered that Commissioner Okafor collected money from 12 parks that got to his personal pocket.”

The group recalled that, “it was the former ASMATA President, Hon. Okwudili Ezenwankwo, who is now a member of House of Representatives representing Orumba Federal constituency, that handed over traders to APGA which made the party to win landslide in any election in the state including that of Governor-elect, Prof. Charles Soludo”.

“Governor Willie Obiano should sack him now or the Commissioner should wait for our protest in no distant time and then know our identity” they affirmed.