Insurance firms yet to get claim notification on Ikoyi building collapse 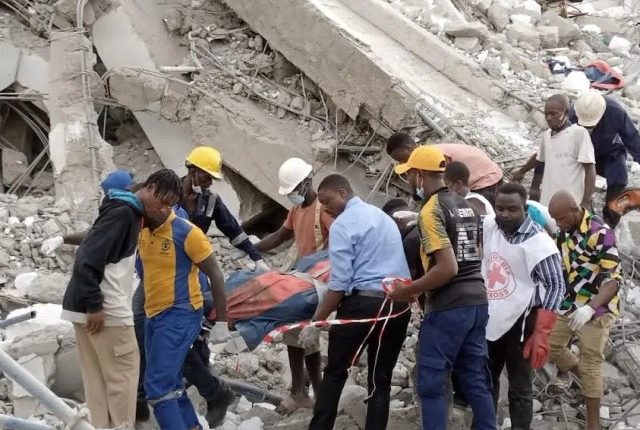 Almost two weeks after the collapse of the 21 story building in the Ikoyi area of Lagos, insurance companies in Nigeria said that they are yet to get any notification in terms of possible claims arising from the multiple loses which arose from the incident.

The absence of any notification on claims experts said, are enough indications that the multibillion naira building project which was said to be 80 per cent completion may not have been adequately insured including the compulsory building insurance which seek to indemnify third parties in the project.

The leadership of insurance companies in Nigeria,the Nigerian Insurers Association (NIA) and umbrella body of registered insurance brokers, the Nigerian Council of Registered Insurance Brokers (NCRIB) have said non of their member companies have notified them of their involvement in the insurance of the collapsed building which was owned by Fourscore Height Company.

Chairman of the Nigerian Insurers Association, Ganiyu Musa, told newsmen in Lagos that no insurer has notified the association of its involvement in provision of insurance to the building.

He noted that the association had put in place an enquiry mechanism to ascertain whether members underwrote the building, but no member company has come up to state that it provided cover for the building.

Asked what the association is doing to ensure such buildings which are presently being constructed in country are adequately covered by insurance, he said the association in collaboration with the National Insurance Commission (NAICOM) are engaging federal and state governments to ensure the full implementation of the compulsory insurance law.

The Executive Secretary of the Nigerian Council of Registered Insurance Brokers (NCRIB), Tope Adaramola, also confirmed that no broker has so far notified the council of its involvement in the building project.

He implored Nigerians to cultivate the mindset of embracing insurance which remains the best tool to mitigate risks.

Some insurers have also expressed their misgivings over their exclusion in the panel set up by Lagos State Government to ascertain what led to the building collapse.

They noted that as key players in the protection of lives and properties insurers would have been included in the panel so that that they could offer suggestions that would help forestal such disaster.

Analysts have observed that the call by the Lagos State House of Assembly on Governor Babajide Sanwo-Olu to compensate the families of those that died in the 21-storey building, wouldn’t have been necessary if insurance was given a priority.

The Lagos State House of Assembly had in a motion called on the governor to direct the relevant agencies of government to ensure that all requirements for buildings as stipulated in extant laws of the State are strictly adhered to.

The Speaker of the House, Mudashiru Obasa, who presided over the sitting, said it was an unfortunate development given the loss of lives that occurred following the incident.

“We should exercise patience before passing comments concerning the incident until the findings of the committees looking into it unravels the cause,” he said adding that it was obvious that the agencies saddled with the responsibility of monitoring buildings and their construction have not done much.

He urged his colleagues to sympathise with the families of those that lost their lives.

“The government should compensate their families. If the agencies had done the needful we would not have this sad occurrence,” he said.

The mover of the motion, Nureni Akinsanya (Mushin 1), earlier expressed worry over the collapse of the building in the state.

In the motion he moved on the floor, Akinsanya said: “The House expressed worry over the wide speculation that the building was raised to 21 floors contrary to the 15 floors approved by the Lagos State Physical planning permit authority (LASPPPA) for the owner.”

The motion added that the House was worried that over time, the state had recorded series of building collapses like the one that happened at in November 2006 and a three-storey building that collapsed in Ita Faaji in 2016, among others.

“The House is disturbed about the constant collapse of buildings in the state and the manner in which agencies set up to inspect building work, give certification at various stages of construction and keep records for ease of reference, and realise that these frequent cases of building collapse can be attributed to unqualified or unskilled builders, use of sub-standard building materials, illegal conversion or alterations to existing structures and lack of maintenance to mention a few,” the motion said.

In his submission, Rotimi Olowo (Shomolu 1) implored others to support the motion noting that it was well couched.

Oluyinka Ogundimu (Agege 2) said the motion was all encompassing as the second part of it had given the committee the power to go into details all in the interest of the public.

Chairman of the House Committee on Information, Publicity and Strategy, Setonji David, opined that many factors might be responsible for the incident.

African Alliance Insurance grows profit by 1,300% as Okocha retires as board chairman