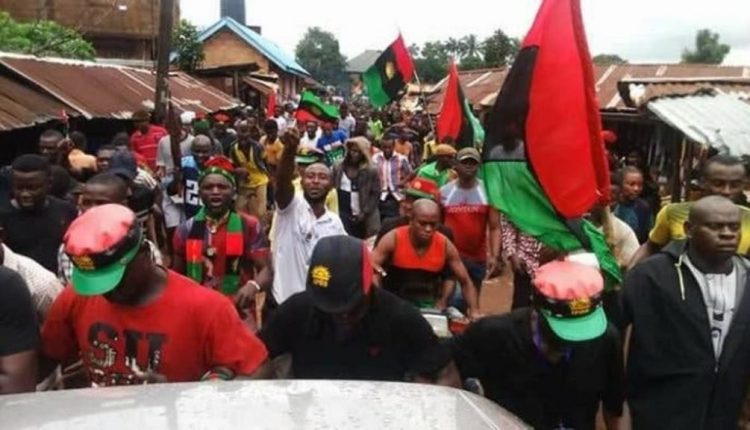 .As Umahi tasks S/East CAN to rescue region from economic collapse

The Indigenous People of Biafra, IPOB  has said it would treat anybody caught using its name to enforce non-existent sit-at-home as a traitor.

The group in a statement by its media and publicity secretary, Emma Powerful reiterated that there is no other sit-at-home order after September 14.

“Any other purported sit-at-home including the suspended weekly sit-at-home on Mondays does not exist in the dairy of IPOB. In fact, after September 14, there is no other sit-at-home this week. Any contrary news or speculations to this effect should be ignored.

“Anybody trying to enforce any sit-at-home order using the name of IPOB is a saboturer, and does so at his peril. If we catch anybody disturbing the peace of Biafrans or residents in Biafra land under the guise of enforcing non-existent sit-at-home order, such a person regret his actions because he will receive the reward of traitors.

“IPOB is a responsible organization with reasoning and empathy. We cannot be part of the problem we are trying to solve. We cannot join the enemies to compound the woes of our people we are fighting to liberate. That was why we suspended the ghost Mondays that we earlier declared because of the economic implications to our people.

“We listened to appeals by the people and reviewed our stance on the matter then. That was why we reduced the sit-at-home protests to the days our leader, Mazi Nnamdi Kanu will be making appearances in court. That is enough for now and we stand by it. Anybody trying to impose another sit-at-home order on our people or enforce illegal or imaginary sit-at-home is not IPOB, and must be dealt with. Such a person(s) are working with the enemies to disrepute IPOB, and we won’t tolerate such stupidity.

“On this note, IPOB strongly condemn the barbaric act by hoodlums and mentally deranged fellows who disrupted a WAEC exam in a school in Imo State on Monday. What a stupid madness! Whoever was behind such barbarity must be made to pay for their actions.

“IPOB leadership is hereby promising to replace those motorbikes burnt in the school to their owners and rebuild school blocks burnt by hoodlums in the name of ESN and IPOB volunteers.

“This is not to portray or indicate that IPOB  committed the heinous crimes against our people and promise to set up tax force to checkmate those parading themselves as IPOB volunteers and those committing this crime against humanity and our people, we plead to Biafrans to bear with us for this dastardly act against humanity they are using to disrepute and demormize IPOB in the world.”

Meanwhile . Governor David Umahi of Ebonyi State has tasked  the Leadership of the Christian  Association of Nigeria (CAN), to wade into the menace of Sit-at-Home Order by the Indigenous People’s of Biafra (IPOB), insisting that the compliance of the directive has culminated in the economic downturn of the zone.

Umahi made the appeal in abakaliki the Ebonyi State capital on Tuesday on the occassion of the inauguration ceremony of the New Executive Members of the Christian Association of Nigeria (CAN) South-East zone.

The Governor reiterated that his administration would continue to assist the Church, and pledged support for the new Leadership of South-East CAN.

“A sprinter Group may come up tomorrow and begin their own sit at home on Wednesday, or Thursday , then the end has come ”

“I plead to the Christian Association of Nigeria to announce the dangers we are doing to ourselves , there is no sit-at -Home in South West, North West, South-South etc”

The Governor maintained that his administration would continue to preach that the Federal Government collect Value Added Tax and share it among the 36 States of the federation .

“The New South East Chairman of CAN Reverend Father Nwali, is a blessing to Ebonyi State, our success as a government is because we anchored it on the body of Christ”

“I want to appeal that the citizens and citizens have a duty to perform, the number of failure of leadership is because the Lead have not performed

Inaugurating  the New Executive Members, the National President of Christian Association of Nigeria Reverend Dr Sampson Ayokunle, charged the executive to anchor their duties to God.

Earlier in an acceptance speech on behalf of the newly inaugurated Executive the Chairman of the South-East CAN Reverend Father Dr Abraham Nwali, pledged that the new Executive of South-East CAN would discharge their responsibilities with the gear of God.

“We shall pursue our motto namely Ecumenism, Solidarity in South-East, and Integration of our Leader to build a Body of Christ ”

The inauguration ceremony had in attendance leadership of CAN South-East zone, CAN Chairmen for Enugu, Abia, Anambra, Imo and Ebonyi States respectively.

The merits in power shift to southern Nigeria in 2023