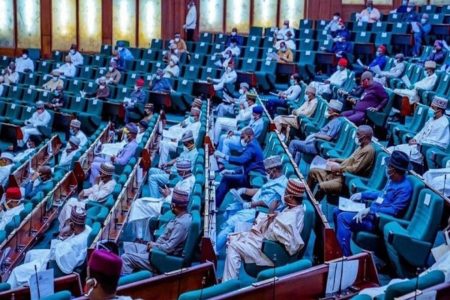 The House of Representatives Ad-hoc Committee on Lease of Government Owned Assets on Tuesday resolved to write to the Economic and Financial Crimes Commission EFCC, and the Bureau of Public Procurement BPP on the issue of unrecovered assets of the federal government amounting to N6.5 billion in the hands of private companies

The House also has demanded a detailed record of all the leased assets owned by the federal government in Ministries Departments and Agencies from the Infrastructures Concession and Regulatory Commission ICRC.

The House probe panel also requested from the Federal Produce Inspectors Directorate a detailed report of the charges on fumigation of warehouses containers and loading depots on agricultural produce inspected by the directorate in terms of amount, beneficiary, and utilisation.

Chairman of the House Committee Hon. Daniel Asuquo gave the rulings separately at an investigative hearing on the matter where the ICRC, Federal Produce Inspectors Directorate and other agencies were invited and grilled on the memoranda submitted by these agencies to the panel.

The Committee had earlier directed that all invited agencies were to appear before the panel with any form of lease, concession, rent, service contract, Joint venture, management, and operating contract, and other types of PPP arrangements made with the concessionaires.

At the hearing, the ICRC Director-General Mr. Michael Ohiani said that the agency has 147 lease agreements entered into by the concessioners on government-owned assets

He said that Section 39 of the ICRC Act empowers the agency to open a special account where all collections from the sale or lease of government properties are to be paid into by the agency.

Appearing before the Ad-hoc Committee earlier, Director of Produce Inspection Federal Produce Inspection Directorate Mr. Abdul Sule said that the agency is empowered to inspect all agricultural products produced by farmers in all states of the federation and the nation’s capital.

He also hinted that the agency is in charge of the inspection of warehouses, containers, and loading depots for all imported and exported goods and the enforcement of laws on such goods.

Also in a presentation Managing Director of Tafawa Balewa Square Lagos Mr. Jafaru Usman Bayero said that the establishment has 388 shops and offices and charges rent of N10,000 and N4,000 service charges on tenants from the government-owned facility.

In his ruling, the chairman of the House probe panel Hon. Asuquo said that the committee is requesting the details of all the leases, contracts, payments, and outstanding debts on all government-owned assets concessioned or leased out by the relevant agency.

He also said that the House probe panel will pay an unscheduled visit to the Tafawa Balewa Square Lagos to ascertain the state of the shops, offices, and other facilities under the care of the facility managers.