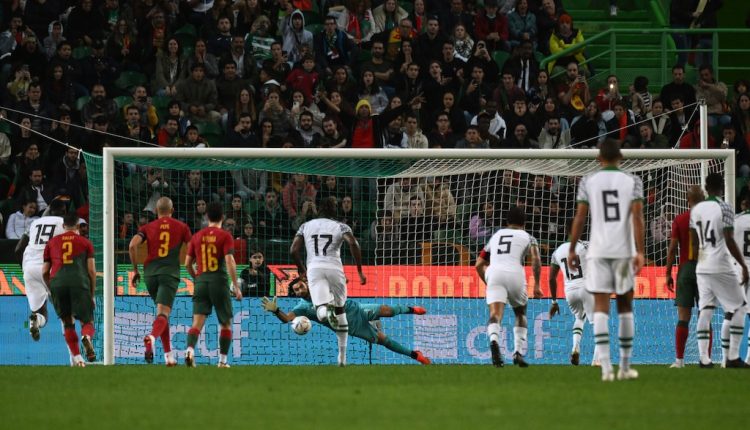 There was plenty left to ponder for Nigeria after the Super Eagles suffered a humiliating 4-0 loss to World Cup-bound Portugal, sans Cristiano Ronaldo, on Thursday night.

Two of the major takeaways are that Emmanuel Dennis may not play another game for Nigeria if the fans have anything to say about it, and coach Jose Peseiro could be looking at the exit door in the not too distant future.

Manchester United midfielder Bruno Fernandes scored a brace in the first half, while Gonzalo Ramos and Joao Mario finished off the flailing Eagles with two late goals in the second.

Defeat on the night took Peseiro’s record to a miserable five losses and two wins from seven games. Worse, it meant he had lost all five of the friendly games since taking charge of the team.

But the biggest drama of the night came from Nottingham Forest striker Emmanuel Dennis. With Nigeria down two goals, Dennis insisted on taking a penalty kick won by debutant Bright Osayi-Samuel, despite not being the team’s designated penalty taker, and then proceeded to see his kick saved.

The miss was given extra prominence for the manner in which the situation unfolded. Osayi-Samuel received an excellent pass from the Forest man, but was tripped in the box. Dennis, who had only come in as a sub and was not one of the designated penalty takers, quickly grabbed the ball and made for the spot.

Forward Paul Onuachu tried to get him to hand it over but was rebuffed. Coach Peseiro was pictured on the sideline calling for the ball to be handed over and was ignored. Captain William Troost-Ekong, who is one of the designated kickers, also saw his entreaties fall on deaf ears.

The subsequent miss, and the two goals that the Portuguese scored right after, had Nigerians furious. His case was not helped by fans recalled his culpability for Ghana’s goal that eliminated Nigeria from the World Cup when he failed to track Thomas Partey after coughing up possession.

Peseiro played the issue down in his post game comments, addressing just the missed penalty: “Of course he missed the penalty and after that they scored two goals. That is very sad, but about that, I speak to my players.

“So he missed the penalty, but the next time he can score. We need to defend our players, which players don’t miss penalties in the world. Any player can miss a penalty.”

However, a team official told ESPN the issue was indeed addressed in the locker room.

But Peseiro now has more pressing issues than a egotistic forward to deal with, after yet another defeat.

All of the pre-game talk had centre around Napoli striker Victor Osimhen’s reasons for missing the game through injury, with chatter suggesting the forward may have had other reasons for ducking out.

But a source close to the player told ESPN that he had a long-standing back issue which surfaced at the last league game and the striker had even offered to fly over to be examined by the Nigeria medical team.

“He spoke to the coach and wanted to come down to the camp to be examined by the Nigeria team doctor, but the coach told him not to worry, and excused him,” said the source, who is a part of the player’s team.

With Osimhen missing, Nigeria’s frontline was led by Terem Moffi who, with 10 goals so far, is the third leading scorer in France behind Kylian Mbappe (12) and Neymar (11). But, starved of service from a midfield of Alex Iwobi, Wilfred Ndidi and Joe Aribo, the 23-year-old barely got a sniff at goal.

The state of the midfield meant it is doubtful if even Osimhen would have made a difference, with the Eagles totally overrun in midfield, despite having all three first choice personnel to put out on the field for the first time in a long time.

Those failings did not stop in midfield. Portugal’s passing carved up the Nigeria defence with ease for the opening goal after just nine minutes, for Diogo Dalot to set up the easiest of opportunities for his Manchester United teammate to sweep home.

Osayi-Samuel, making his debut for Nigeria, was the one bright spot, playing at right back with a mention for Iwobi, who looked the only real body in midfield.

After nearly five months in charge and seven games altogether, Peseiro’s team still look nowhere near a cohesive unit, and there are already rumblings, after this latest reverse, for the coach to be pushed closer to the exit door.

But a high-ranking NFF official told ESPN that it was too early to entertain any such thoughts: “He has just started and we need to be patient with him.

“He has also won the two games that were important, that is the qualifiers for the Nations Cup. Friendlies are just friendlies, and we will judge him on the qualifiers.”