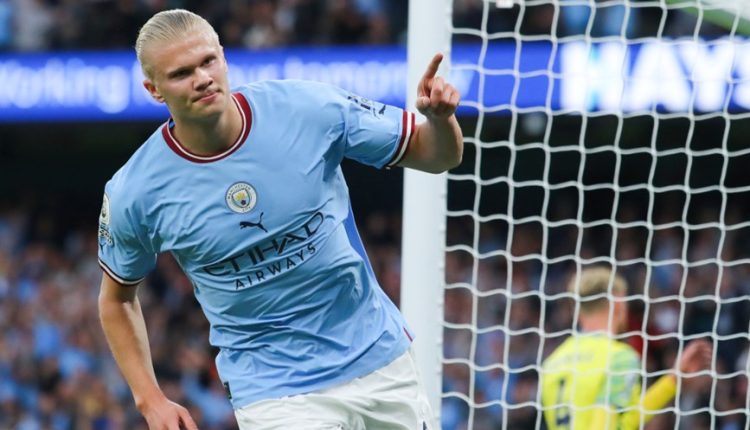 Erling Haaland continued the blistering start to his Manchester City career by scoring a hat-trick inside 38 minutes as the Premier League champions smashed promoted Nottingham Forest 6-0 on Wednesday.

Haaland has scored a league record nine goals in five games since joining City from Borussia Dortmund and has back-to-back hat-tricks after netting three in Saturday’s win over Crystal Palace.

“Amazing, nothing more to say,” said the Norwegian.

“It was about keeping doing what we did in the second half against Palace, play, play, play – it was nice. It’s been good so far, I’m not complaining,” he said.

With City’s other new forward, Argentine Julian Alvarez, scoring twice after the break, the win was a clear warning to title rivals of the extra attacking threat Pep Guardiola’s side now possess.

The Spaniard said Haaland was simply repeating the form he had shown throughout his prolific career.

“What he has done in Norway, Austria, Germany he has started to do here. He is talented, we knew it and today we saw Julian as well. We have two incredible strikers with an incredible sense to score goals,” Guardiola said.

Haaland put City ahead in the 12th minute, the 22-year-old latching on to a cross from Phil Foden to hook it past Forest keeper Dean Henderson.

Henderson’s poor clearance then led to City’s second when Bernardo Silva collected the ball and launched a counter with a swift exchange of passes and Foden again provided the assist to Haaland who slotted home from close range.

Haaland completed his treble, leaping to power in a far-post header after defender John Stones had nodded a corner back across the face of goal.

Forest were unable to contain an excellent City who made it 4-0 shortly after the break with a fine Joao Cancelo drive from the edge of the box.

Alvarez added two more for City, both powerful strikes, as Pep Guardiola’s side made it four wins out of five games with 19 goals scored.

Haaland was substituted in the 69th minute, although Forest could hardly have been relieved to see Kevin De Bruyne replacing him.

The Belgian created City’s sixth, charging up field after a Forest free kick struck the wall and finding Mahrez, whose shot was blocked before Alvarez pounced and blasted home.

Unbeaten City are in second place on 13 points, two behind leaders Arsenal. Forest are in 15th place on four points.

I ‘ll not pay lip service to education- Sanwo-Olu