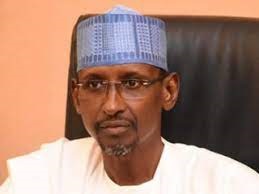 …..arrests 5 workers
Favour Ishember, Abuja
Authorities of the Federal Capital Territory Administration (FCTA) has vowed to prosecute an Abuja landlord for allegedly drilling over 200 meters borehole on the road in front of an estate at No 4, Sani Zangon Daura street, off Bala Muhammad Way, Guzape District.
Director, Department of Development Control,  Muktar Galadima, who led the operation, warned developers and landlords against destruction of public properties, adding that the FCT Administration would not hesitate to use relevant laws to prosecute any violators.
Galadima who was visibly angry at the flagrant abuse  equally took away five workers found working on the site on Tuesday, and  said, “We woke up with someone drilling borehole on our road.
They drilled the borehole on our pedestrian walkway, in fact my heart is pained.
“This is a serious damage to the environment. Definitely we are going to prosecute him. That is why we are liasing with Abuja Environmental Protection Board, AEPB, and other relevant agencies to prosecute the offenders. This is damaging public property. This is vandalization”.
Warning other developers, the Development Control boss said: “This is an opportunity for me to warn other developers that we will not accept this from any developer.
“We will resist any attempt by any developer  to use pedestrian walkway to drill borehole. You have your property and you must obtain approval before you can drill borehole wherever it is going to be”.
He added: “It was a concerned citizen that drew our attention to this. We will not allow this. We will continue monitoring developments in Abuja, even during weekends”.
Head, Monitoring and Enforcement, Abuja Environmental Protection Board (AEPB), Kaka Bello, while corroborating Galadima, said that the owner of the building would be charged to court according to the Board’s Act.
“This is a walkway meant for us and we will charge them to court isinglass our relevant laws”, he said.
Chief Engineer in charge of that Guzape area, Engr. Aliyu Ahmed lamented the rate at which boreholes were being drilled indiscriminately in the area.
“The issue of drilling of boreholes on our walkway has been rampant. There are many boreholes sunk around this area alone.
“We are going to lock up all the illegal boreholes. Drilling borehole on the road corridor is illegal. You can drill borehole inside your compound but the outside of your compound doesn’t belong to you”.
A staff of the firm drilling firm handling the project, Davita Drill Tech, Solomon Donald tol journalists that they started the drilling since Sunday.
He however could not ascertain whether there was a permit from the authorities to drill since the owner of the house could not be reached.
He and and three of his colleagues, and a gateman at the property were taken by FCTA authorities for further questioning.