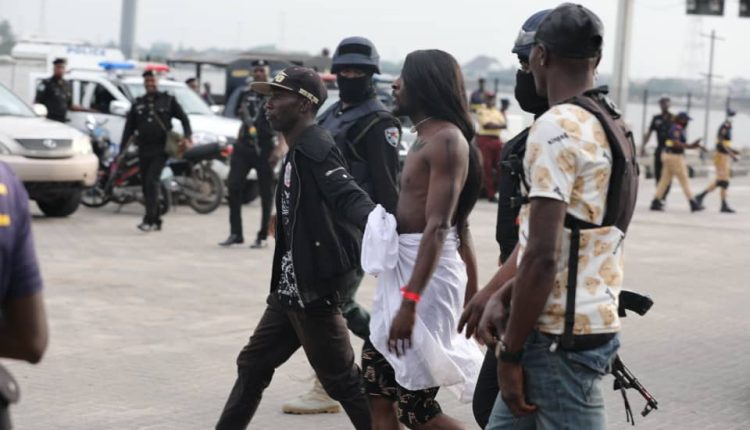 Operatives of the Lagos State Police Command have arrested two protesters at the Lekki tollgate where the #EndSARS Memorial Protest is scheduled to hold in the state today.

One of those arrested claimed to be a journalist while the other was seen carrying a placard.

The police had reportedly warned that anyone seen at the tollgate without an ID card will be arrested.

The arrested journalist told newsmen that he works with LegitTV and that his phone, driver’s license and other documents were taken away from him.

Speaking from a Lagos State Task Force van where he was kept by the police, the journalist who identified himself as Abisola stated that he lost his ID card in transit.

About 30 police trucks and armed personnel are currently at the tollgate to enforce a ban on protests issued by the police command.

A car procession in honour of those believed to have lost their lives at the tollgate when soldiers dispersed #EndSARS protesters on October 20, 2020, is scheduled to hold at the tollgate today.

The #EndSARS protests which were held in October 2020 were against the activities of the now-disbanded Special Anti-Robbery Squad, a unit of the Nigeria Police Force which was accused of police brutality.

The epicentre of the protests was the Lekki tollgate in Lagos where many youths gathered day and night to air their grievances against police brutality and bad governance.

They were dispersed from the location by gun-wielding soldiers on October 20, 2020, an action which some quarters believe led to the loss of lives.

This was followed by the destruction of private and public properties by hoodlums in Lagos, an incident that informed the latest warning issued by the police in the state.

Also, as against the directive of the Oyo State Police Command , scores of youths in Ibadan, on Wednesday stormed the streets to commemorate one year anniversary of the ENDSARS protests against police brutality.

The state police command had issued a statement asking the organisers of the planned ENDSARS anniversary to shelve the plan .

It was gathered that no fewer than five police officers died during the protest which took place in October last year.

The Commissioner of Police, Ngozi Onadeko, in a statement signed by its Public Relations Officer, Adewale Osifeso, advised parents and guardians not to allow their children to take part in the protest.

The police in a bid to resist the protesters stationed their vehicles and officers at strategic locations in Ibadan.

There were heavy police presence at Mokola Roundabout, Sango, University of Ibadan, Agbowo junction, Dugbe and Oyo State Secretariat in the early hours of Wednesday.

The protest, which was devoid of violence , saw a peaceful procession around Iwo Road, Agodi and State Secretariat.

The protesters, who noted that they had right to peaceful protests, called for the release of all those held in captivity as a result of last year’s ENDSARS’ protest.

Reports from Enugu showed that Police in Enugu  swooned on participants at an Endsars anniversary memorial symposium.

The Police who came in several police vans entered the Centre for Monument,#2Awgu street, Independence Layout, Enugu, venue and started baring orders and began chasing the participants away.

They seized and destroyed materials belonging to the participants and conveners.

The memorial symposium was put together by the Network of Civil Society Organizations in Enugu state to commemorate the reported killings of innocent Nigerians during the Endsars protest of police brutality in Nigeria.

According to comrade Chukwudi Anachuna,the chairman of the  Network of CSOs in Enugu

,the police had invaded the venue in a Whatsapp message he shared a  while ago.

“Our gathering has been disrupted by the police. The youth who wanted to resist were attacked and some even arrested. Some of our materials were also taken away.”

Meanwhile the Police could not be reached immediately for confirmation

Normalcy was restored a few hours after Lagos Commissioner of Police Hakeem Odumosu arrived at the protest site.

As Over 200 pose naked for art installation at Dead Sea However, tear gas was used to disperse the protesters, who fled in various directions.

According to the Police Commissioner, the organisers informed the police that they would be protesting for two hours, using vehicular movements.

He said: “The protest was between 8 am and 10 am, anything, after 10 am, is a nuisance. Odumosu said the action was to prevent a breakdown of law and order.

He claimed that at the protest site, some “miscreants” dressed as protesters were arrested with machetes and other dangerous weapons. Journalists who were detained at the protest site were also released after being properly identified.