EBONYI STATE GOVERNMENT IS KNOWN FOR TRANSPARENCY IN THE CONDUCT OF GOVERNMENT BUSINESSES. 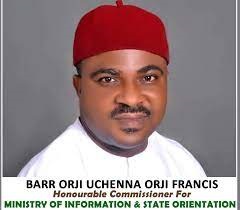 ALL THE STATE GOVERNMENT DOES IS IN THE PUBLIC DOMAIN.

-It is only in Ebonyi State that you see details of the outcome of the State Executive Council meeting being published and broadcast for public knowledge.
– In Ebonyi State, the financial transactions of the State Government are pushed to the website for public consumption.
– In Ebonyi State the salaries of workers are not owed. We make bold to say that the civil servants salaries for the month of July 2022 have been paid. No arrears of even one month at all.When people tweet that Ebonyi is one of the States owing salaries, we urge the public to discountenance such social media posts as absolutely irresponsible and without foundation as Ebonyi State Government has remained unblemished in her duty of care for the welfare and salaries of the civil servants.
– In Ebonyi State, Open Government Partnership ( OGP) and Citizens Participation in Budgeting is deeply embedded in the policy direction of Ebonyi State Government. CSOs, Civil Servants and Professional Organisations contribute in project execution processes especially in budget conceptualization, Monitoring and Evaluation and project execution. Direct Labour works is an innovation that encourages the participation of civil servants in the project execution processes.
-In Ebonyi State, the Medium Term Expenditure Framework is always captured, appraised and followed up by the State Executive and the State House of Assembly. Details are sent to the public domain for the benefit of the citizens’ contributions.
-In Ebonyi State, institutions are meant to freely and transparently follow their Programmes including nominations of the managers of their institutions.

-Watch the outcome of the Exco Press Briefing of 11th August,2022 by the State Commissioner for Information and State Orientation,Hon. Barr. Orji Uchenna Orji.