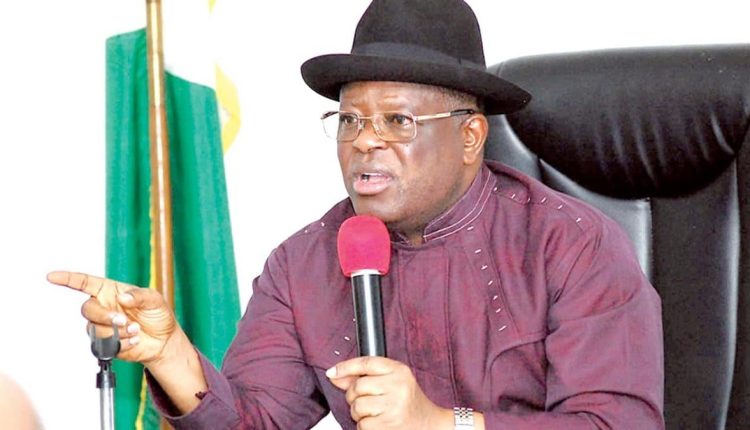 Governor David Umahi of Ebonyi State has presented  an Appropriation bill of N145, 410 billion for the 2022 fiscal year to the 24 member State House of Assembly.

Presenting the budget tagged “Budget of Later Rain”on Wednesday, Governor Umahi said that the budget covers the Capital and Recurrent Expenditure for the financial year ending 2022 .

Umahi said that the budget represents an increase of 46.65 percent over the revised approved. budget of N99.157 billion.

According to him, the State expects about Four Billion, three Hundred and Fifteen million naira (N4,315 billion) from TETFund for our tertiary institutions .

“UBEB growth of over One billion ,two hundred million naira ,SFTAS of N16.727 billion ,World Bank Covid-19 Grants of One billion naira N1,000,000.00, Federal Government bridging Financeof N18 billion given to each of the 36 States and Domestic Loans of Seven billion naira to fund budget deficit”

“The proportion of 61.73 percent Capital to 38.27 percent Recurrent (ratio of 1.6 to 1) is structured bearing in mind our determination to deepen our capital projects development especially the completion of ongoing projects.

The Governor said that the 46.65 percent increase of the 2022 Budget over the 2021 Revised Budget was due to the carry over of the larger part of the Expected Receipts in this fiscal year .

He listed the areas of attention in the 2022 fiscal year to include giving more employment to the people that resulted in increase in recurrent expenditure , projections for infrastructural intervention in both Ebonyi State College of Education and Ebonyi State University to raise the quality of learning.

“Mr Speaker and Honorable Members , Let me at this juncture in the discharge of my mandate in the Constitution and with every sense of responsibility and gratitude to God, present for the kind consideration, our 2022 Appropriation Bill and Budget estimates in the sum of One Hundred and Forty Five Billion ,Four Hundred and Ten million , five Hundred and Ninety Seven thousand Seven Hundred and Twenty three naira, forty Nine kobo”

Earlier in his speech, the Speaker Hon Francis Nwifuru assured that the House will give speedy passage of the Appropriation bill.

The Budget presentation was preceded by the confirmation of Chief Hycinth Ikpor as the Chairman of the State Universal Basic Education Board (EB-UBEB ) by members of the House of Assembly.

Meanwhile, Gov Godwin Obaseki on Wednesday presented a budget proposal of N214.2 billion for the 2022 fiscal year to the state House of Assembly for consideration and approval.

The budget Christened ‘Budget of Renewal, Hope and Growth showed an increase of 32.9 percent over the 2021 approved budget of N161 billion.

Presenting the budget, Obaseki said that it was made up of N95.9 billion recurrent expenditure and N118 billion capital expenditure.

“Mr Speaker, the increase in capital expenditure over the previous year’s approved budget underscores my administration’s commitment to enhance and stimulate the ease of doing business

“Recurrent estimates of the budget are based on $57 per barrel bench mark for crude oil and an average daily production of 1.88 million barrels per day as well as increase of our IGR to N50.2 billion