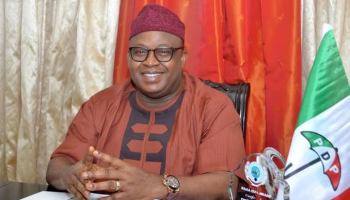 A Federal High Court sitting in Abuja has restrained the Peoples Democratic Party, PDP, at “any level from suspending” the party’s national Vice Chairman Dan Orbih.

The court granted an order of interim injunction restraining PDP (the defendant) any level by itself, its servant, agents, officers or others however described from giving effect to recognising or acting upon any so-called confirmation or ratification by a so-called enlarged party elder or state working committee suspending the applicant (Dan Orbih).

Edo North Senatorial leadership of the party had earlier pronounced the suspension of the party chieftain on October 8, 2021 owing to what the group described as “violation of party’s constitution and anti-party activities.”

In a swift reaction to the move, the party headquarters described Orbih’s suspension and others as “a nullity”.

PDP’s National Publicity Secretary, Mr Kola Ologbondiyan, on October 9, 2021, “while the national leadership noted the issues and complaints raised by some stakeholders in Edo it, however, enjoined the chapter to be guided by the provisions of the party’s constitution.

“Consequently, the purported suspension of Orbih, a member of the National Executive Committee (NEC) of our party, by the Edo North Senatorial leadership of the party is statutorily beyond its powers and to that effect a nullity.

“The NWC, however, assures (all) that it is taking strong steps to ensure amicable resolution of all issues and ensure that the interests of all members in the chapter are protected,” Ologbondiyan said.

The Federal High Court, on October 14, 2021, also ruled in favour of Dan Orbih, restraining the defendant at any level of its organ or its servant, agents, officers, or howsoever described from giving effect to, recognising.