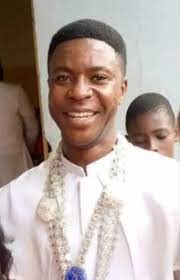 The Catholic Church Afara ukwu Umuahia,Abia state has expressed worry over the abduction of their  young priest along Ohokobe Afaraukwu in Umuahia North local government area of Abia state.

The Catechist of St Theresa Catholic Church Afara ukwu Umuahia ,Mr Mathias Ezinwa Uwakwe who disclosed this to Newsmen at the church premises Afaraukwu Umuahia while confirming the kidnapped of Rev.Fr. Godfrey Mark Chimezie  , said the young priest was only posted in that  church about  two months ago, around  August ,2021 ,this year.

According to him ,”He was ordained by July this year and posted in this church as the second assistant priest and he is from Enugu state .

“The church has been worried about his health, a young man that has not eaten since morning “,he lamented.

“We were in the church praying around 7 Am , when our attention was called by a man, who took us to his vehicle and explained to us how he was abducted.

“He said ,some armed men intercepted the young priest when he was coming back from the  morning mass which he conducted at St Gabriel Afaraukwu with their Jeep ,forced him out of his Toyota Corolla car into their Jeep and zoomed off ”

“We have officially reported the incident to the Catholic Bishop of Umuahia .

And the suspected kidnappers have not made any contact since he was kidnapped  and his phone number has not been going through, and we are worried ” he said