Campaigns violence: Call your thugs to order or face wrath of the law, NSA warns governors 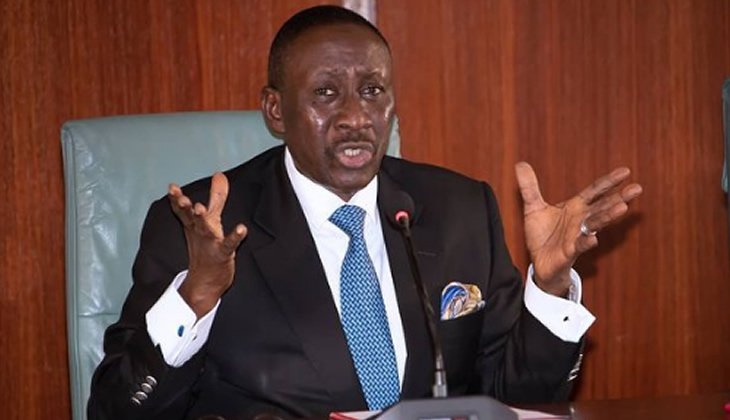 The National Security Adviser (NSA) to the President, Major General Babagana Monguno (rtd), has said security agencies have been detailed to go after political thugs sent by state governors to prevent opposition parties from mounting campaign materials in the states.Addressing newsmen Thursday at the State House, Abuja, the NSA said when the law enforcement agencies move against the thugs, there will be no hiding place for the perpetrators.

He warned the governors to “call their Capo regime to order because when we move, there will be no hiding place.”

The NSA who at the briefing provided key updates on Nigeria’s current security status, and measures taken so far by the federal government to deescalate the issue of banditry also highlighted the related successes recorded so far in the area of security in Nigeria.

According to him the President has given the security agencies clear instructions to use every legal means to deal with perpetrators of crimes in the country including but not limited to insurgency, banditry, kidnapping, separatist agitation and politically motivated murder and thuggery.

Said he: Mr. President has given a clear instructions to the security agencies to deal with anyone who try to derail the electoral process. Mr. President wants a free, fair and credible elections like we have recorded in Anambra, Ekiti and Osun states governorship elections.

“Those political leaders who recruit these thugs to inflict harm will not longer have it rosy as the long arms of the law will get them and they will face the consequences of their actions”.

Speaking specifically on the emerging pattern of some state governors not allowing opposition political parties space to hold their rallies and campaign processions in their domain and employing the use of political thugs to attack opponents, Monguno said the federal government frowns at such behaviour and will go hard on the thugs.

Said he: ” the message to the politicians is simply, if you don’t control your thugs, federal government will help you to control them. We are not going to operate outside the law or go about it in illegal way but government is going to go hard on political thugs”.

“We are aware that thugs who fume in the mouth, red-eyed and bloodthirsty lot under the influence of drugs and hard substances looking to unleash terror on the population,  government will deal with them squarely”.

Meanwhile, the NSA had also at the briefing reeled out the huge achievements recorded in the fight against security by federal government under President Buhari, pointing out that the government has done well in the circumstances it met seven years ago.

According to him Nigeria was in the precipice in 2015 before President Buhari assumed power with Boko Haram holding  territories in the Northern part of Nigeria, the separatist agitators in the South East, clashes in the South West among others.

He however insists that the security situation across the country has stabilised, arguing that even the recent security threats in the Federal Capital Territory (FCT) have been neutralized.

Said he: “terrorism and insurgency in the North East, banditry in the North West,  separatist agitation  in the South East and South West have been fought to large extent”.

“We thank our neighbours Niger Republic,  Chad and Cameroon for their support in the war against terrorism”.