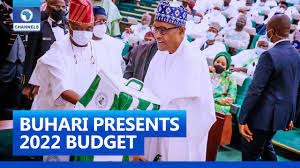 .We borrowed our way out of two recessions, says President

President Muhammadu Buhari Thursday in Abuja presented to the National Assembly the 2022 Appropriation Bill for an aggregate expenditure of N16.39 trillion

Buhari while addressing the joint session of the NASS described the 2022 Appropriation as Budget of Economic Growth and Sustainability, adding that the 2022 budget is also the first in the nation history, where Ministries, Developments and Agencies (MDAs) were clearly advised on gender responsive budgeting.

He said, “These are part of critical steps in our efforts to distribute resources fairly and reach vulnerable groups of our society,’’ he said.

He maintained that defence and internal security would continue to be the top priority of his administration.

“We remain firmly committed to the security of life, property, and investment nationwide. We will continue to ensure that our gallant men and women in the armed forces, police, and paramilitary units are properly equipped, remunerated, and well-motivated,’’ he said.

On the parameters and fiscal assumptions of the 2022 Appropriation bill, the president told the legislators that 2022 to 2024 Medium Term Expenditure Framework and Fiscal Strategy Paper sets out the parameters for the 2022 Budget is Conservative oil price benchmark of 57 US Dollars per barrel;

Other parameters are Daily oil production estimate of 1.88 million barrels (inclusive of Condensates of 300,000 to 400,000 barrels per day); an Exchange rate of four 410.15 per US Dollar; and a Projected Gross Domestic Products (GDP) growth rate of 4.2 percent and 13 per cent inflation rate.

He said this included Grants and Aid of N63.38 billion, as well as the revenues of 63 Government-Owned Enterprises.

President Buhari said the oil revenue was projected at N3.16 trillion, non-oil taxes are estimated at N2.13 trillion and Federal Government’s Independent revenues are projected to be N1.82 trillion.

According to him, Nigeria is currently emerging from a very difficult economic challenge, saying that 2022 is a crucial year for the completion of his administration’s legacy projects.

He said, “We must continue to cooperate and ensure that our actions are aimed at accelerating the pace of economic recovery so that we can achieve economic prosperity and deliver on our promises to the Nigerian people.

“The fiscal year 2022 is very crucial in our efforts to ensure that critical projects are completed, put to use, and improve the general living conditions of our people?”

“The 2022 Budget will be the last full-year budget to be implemented by this administration. We designed it to build on the achievements of previous budgets and to deliver on our goals and aspirations as will be reflected in our soon-to-be-launched National Development Plan of 2021 to 2025,” he said.

Highlighting the performance of the 2021 budget, President Buhari said by July 2021, Nigeria’s daily oil production averaged one 1.70million barrels (inclusive of condensates) and the market price of Bonny Light crude averaged 68.53 US Dollars per barrel.

“Accordingly, actual revenues were 34 percent below target as of July 2021, mainly due to the underperformance of oil and gas revenue sources.

“The Federal Government’s share of Oil revenue totaled 570.23 billion Naira as of July 2021, which was 51 percent below target, while non-oil tax revenues totaled 964.13 billion Naira.’’

President Buhari, who commended the legislators for the expeditious consideration and passage of the Supplementary Appropriation Bill 2021, assured the strong commitment of the Executive to strengthen the relationship with the National Assembly

“Let me start by commending you for the expeditious consideration and passage of the Supplementary Appropriation Bill 2021.

“This further underscores your commitment to our collective efforts to contain the COVID-19 Pandemic and address the various security challenges facing our country. I will also take this opportunity to thank you for the quick consideration and approval of 2022-2024

Meanwhile, the Speaker of the House of Representatives, Femi Gbajabiamila, has said that the National Assembly would “ensure exhaustive consideration” of the 2022 budget that President Muhammadu Buhari presented to the federal legislature on Thursday.

The Speaker, who said the National Assembly was committed to the timely passage of the Appropriation Bill as it did in the last two years, noted that the next two to three months will be for the strictest scrutiny of the budget estimates and emphasised that lawmakers would hold government agencies accountable for the previously appropriated funds.

In a remark at the budget presentation before a joint session of the National Assembly, Gbajabiamila recalled that upon inauguration, the 9th Assembly committed itself to pursue long-awaited and critical reforms to the appropriations process for better delivery on the promise of national development.

“Over the last two budget cycles, by the joint effort of the executive and legislature, we have made significant progress in this regard and achieved reforms that will stand the test of time and count in our favour,” he noted.

Speaker Gbajabiamila added that while working to deliver the previous budgets, the lawmakers worked “through the day and night, forgoing all other considerations in a joint effort to deliver a national budget that meets the highest expectations of the Nigerian people.

“Therefore, I am confident that the National Assembly will give this Appropriation Bill the prompt consideration it demands.

“However, let me use this opportunity to say to the heads of ministries, departments and agencies of the Federal Government of Nigeria that the determination of the National Assembly to deliver a timely budget will not derogate from our responsibility to ensure exhaustive consideration of the Bill.

“We will demand a thorough accounting for the funds previously appropriated, disbursed and expended. And we will take steps to hold to account those who fail to provide the records we need to make informed decisions on the Appropriation Bill. This is the responsibility of the National Assembly, and we will live up to it.”

The Speaker noted that the reforms introduced by the 9th Assembly in the appropriations process, “including establishing a January to December budget cycle, improving oversight procedures, and ensuring greater fidelity to the letter and spirit of our appropriation laws, have led to measurable improvements in public infrastructure, access to education and housing, healthcare and transportation, amongst others.

“These improvements, which have had a positive impact on the lives of millions of Nigerians across the country, inspire us to do more.”

He said innovations in technology, the changing nature of global trade, the challenges of cross-border insecurity and the increasing interdependence of nations have continued to “present challenges we must overcome and opportunities we must embrace.”

As legislators and leaders in government, the speaker said, “we have a continued obligation to ensure that in considering this Appropriation Bill, we make all deliberate efforts to ensure that we continue to make critical investments in education and healthcare, public infrastructure and national security.

“Through these investments, we can hope to build an economy that provides enough well-paying jobs for our young population so that we can, in our lifetime, end endemic poverty in our country and eradicate the social ills that derive therefrom.”

The Speaker said the House has, in the last one year, passed several important resolutions relating to healthcare, primary education and national security that require actual funding.

Gbajabiamila thanked President Buhari for coming to present the budget estimates personally as usual, and commended the Vice President, Professor Yemi Osinbajo; the Secretary to the Government of the Federation, Mr Boss Mustapha, the Budget Office, Honourable Ministers and all those who contributed to drafting the Appropriation Bill.

“The National Assembly will build on your efforts. Together, we will deliver an Appropriation Act that provides real solutions to national problems, unlocks economic potential, secures our country and brings a future we can all look forward to and be proud of.”

He also paid glowing tributes to senators and members of the House for their “unmatched determination to delivering the annual budget on time, in line with our commitment to a January to December budget cycle.”