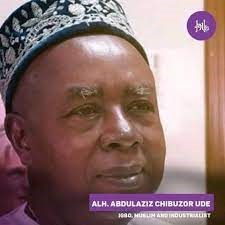 President Muhammadu Buhari has expressed shock and grief over the demise of a foremost Igbo leader and philanthropist, Alhaji Abdulaziz Chibuzor Udeh of Enugu  State.

Reacting to the death of the media investor, President Buhari described Abdulaziz Udeh as “one of the most unostentatious philanthropists in the country who worked for humanity without making any noise about it.”

“Doing goodness without bragging about it is one of the greatest virtues and the late Abdulaziz Udeh had passed such a test of humility with distinction,” the President noted.

According to Buhari, “we also have to give credit to the deceased because of his significant contributions to the creation of Anambra, Ebonyi and Delta States by being one of the signatories or advocates for that effort.”

President Buhari said that “apart from his philanthropic activities, the late Alhaji Udeh was also an advocate of religious tolerance who didn’t discriminate against anyone because of religious differences.

The President prayed to Allah to forgive his shortcomings and reward his good deeds with paradise.

2023:  Group calls for support to Ahmed Tinubu as next President of Nigeria.

2023:  Group calls for support to Ahmed Tinubu as next…