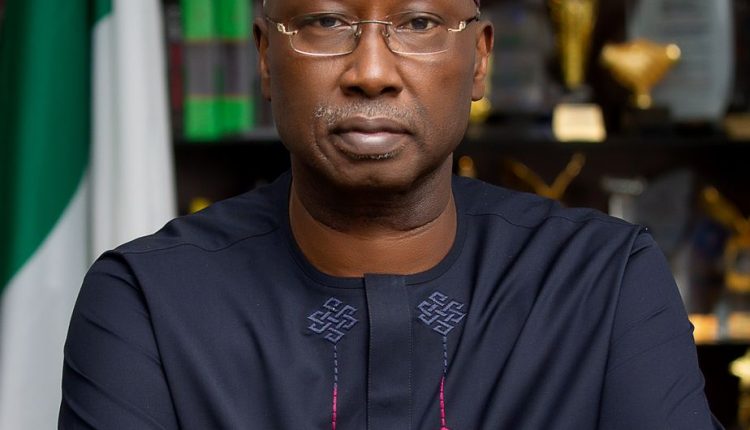 0 20
Share
Before his appointment as a replacement of the former Secretary to the Government of the Federation (SGF) Babachir Lawal, Boss Mustapha has being an active player in the political turf of the nation but he was rarely heard. Perhaps one of the best political stragetists ever breeded in the modern day North.
This can only explain why he ventured into politics at an early stage in life and at 35, he went as far as contesting for the governorship of the old Gongola State in 1991. Though he lost that election to the eventual winner, Abubakar Saleh Michika but he remained very influential in the Adamawa politics.
His paths were to cross with those of the political octopus of the then Gongola politics, Atiku Abubakar who was also heavily involved in the Social Democratic Party, SDP presidential faceoff at the time. This young lawyer’s loyalty to the Atiku and by extension, the Shehu Musa Yar’adua’s political camp prepared him for the future leadership which he is occupying today.
When Atiku became the Vice President in 1999, Boss Mustapha’s influence even grew larger and was among the inner circle of the power brokers at the Villa. For instance  Obasanjo/Atiku government appointed him as a member of the presidential committee tasked to investigate the activities of the Petroleum Trust Fund under Muhammadu Buhari. When in 2007 Atiku aspired for the presidency, Mustapha also served as his deputy director-general. He did not only join Atiku to the Action Congress of Nigeria, ACN but he also emerged the deputy national chairman of the party.
However, his over 25 years of loyalty to the Turaki Adamawa was serious dented in 2014 when his attempt to navigate his ways to the state government as the governor became so turbulent that he had to severe his political relationship with Atiku. Though, the crowd favourite but the political intrigues in the All Progressives Congress, APC consumed him, even with Atiku’s leadership of the party.
But not withstanding, he later served in the presidential campaigns and was among the members of its transition committee in Nigeria’s 2015 election that brought Muhammadu Buhari into power. His loyalty, for the first time shifted from Atiku to President Buhari. On his assumption of office Buhari rewarded him with the office of managing director of Nigeria Inland Waterways Authority (NIWA), the position he held until his appointment as the SGF in 2017.
Four years in the saddle, Mustapha by dint of hardwork and humility has transformed the office of the presidency to an enviable status distinct from the ignoble roles played by the past occupants of the office. Government business is now handled with dispatch. He has also managed to diffuse the unnecessary bureaucratic bottlenecks which used to hamper the operations of the government.
In his letter to Mustapha, President Buhari once wrote, “I am writing to personally recognise your competence and commend the way you organised and led theMinisters’ Retreat. The benefits derived from the Committee’s discussions were enormous, and the added values to the Ministers’ and Permanent Secretaries’ experiences very much appreciated.
‘’Your comprehensive speech at the beginning of the second day of the retreat proved your capacity and experience. For those of us who missed the first day of the retreat, the speech adequately prepared us for the second and final day of the occasion. I am happy to write this short letter of appreciation to you because I am very impressed with your performance”.

President Buhari gushed effusively in commendation to the SGF soon after the successful handling of the 2020 Ministerial Retreat. It was rare but fitted the emerging profile of a tried and tested bureaucrat who gets things done unobtrusively.

Recall that President Buhari had once and it still suffixes; that every minister in his cabinet that wants to see him must first pass through the SGF, a clear evidence of the President’s massive confidence in his leadership potentials.
This vote of confidence on him by Mr. President has however brought out the best out of him making him discharge his duties with panache, competence, patience, dedication and total commitment to the realisation of the yearnings of Nigerians for quick delivery of the dividends of democracy.
As the coordinator of the machinery of the Federal Government, he has passionately tasked ministers and other aides to deliver on Mr President’s promises to Nigerians; regarding such as a sacred duty to the populace.
At the recent Ministerial Retreat in Abuja, Mustapha identified nine priority areas critical to attaining the objectives of good governance: building a thriving and sustainable economy; enhancing social inclusion, reducing poverty; enlarging agricultural output for food security and export, attaining energy sufficiency in power and petroleum products as well as expanding transport and other infrastructural development.
Others are expanding business growth, entrepreneurship and industrialisation; access to quality education, affordable healthcare and productivity of Nigerians; building a system to fight corruption, improving governance and creating social cohesion; and enhancing security for all.
His appointment as Chairman of the Presidential Task Force on COVID-19 gave the public some peep into his flair for hardwork, diligence and commitment.  It is no surprise that the committee’s painstaking national mobilisation effort has stemmed the feared havoc of the global pandemic on the nation. It fetched him the gratitude of the country.

Along with his team of experts, Mustapha has work tirelessly to curtail the menace of Virus, leading from the front and practically having sleepless night all in efforts to keep Nigeria Covid-free.

The PTF on COVID-19 comprises technical and administrative experts from various fields. Add the States and Local Governments with their different healthcare and ancillary professionals. Boss Mustapha was able to forge a structure and systems that work. The result has been an outstanding success in the management of the pandemic by Nigeria. The statistics are revealing.

Nigeria has achieved 96 per cent success in tracing victims while activating several laboratories to conduct tests nationwide. It is one of the many that make up the African success story that Western experts and analysts consider surprising. The results and backing data do not surprise the team at the Presidential Task Force on COVID-19.

Mustapha said strategies evolved by the PTF to manage the pandemic were copied by some other countries, especially on compulsory PCR test for travellers. Indeed, the pandemic has helped the country to scale up its health infrastructure. For instance, this country now has 158 infectious diseases testing laboratories. There was only four pre-pandemic. In January, this year, Mustapha raised the bar of accountability by issuing a detailed statement on the “allocation and management of funds for the national response to COVID-19 by the Presidential Task Force.”

Sources at the PTF speak of its contributions in saving significant resources for the government by eliminating duplication of funds for activities already funded and subsequently appropriated again under the 2020 Amended COVID-19 budgets. An example is how it worked with the Federal Ministry of Health and the Federal Ministry of Finance, Budget & National Planning in late 2020 to reverse over N5 billion that was appropriated for Health Operations, and thus avoided duplication.

Country Representative of the World Health Organization, Dr Walter Kazadi Mulombo has given Mustapha and his team thumbs up. “Nigeria mounted one of the most effective response to COVID-19 putting in place courageous measures and helping to avert the spread that was predicted,” he said in Abuja recently. In fact, the Global Normalcy Index ranked Nigeria 4th position in the Economist’s Global Normalcy Index, out of 50 countries. The rating aims to determine which countries are returning to their pre-pandemic levels, by grading each country using eight indicators of normal socio-economic activities.
Also, despite the current challenges facing Nigeria,  Mustapha is an incurably optimistic who  believes that though the nation has had its fair share of crises but will however overcome them.
While maintaining that the nation has exited recession, he said the economy is witnessing an evolving growth pattern.

“The trajectory into the future is bright. If you see some of the things we have been able to do under the leadership of President Muhammadu Buhari to exit recession in record time, most established democracies are still battling with the recession,” he said. I believe Nigerians will consciously acknowledge the fact that this is our country, that everybody can have the opportunity of ventilating their aspirations.

Born in Adamawa State, Mustapha attended Hong Secondary School, Adamawa state and North East College of Arts and Science, Maiduguri, Borno state, crowning it with WASC and HSC in 1976. He earned his Bachelor of Law (LL.B) from Ahmadu Bello University, Zaria, in 1979 and was called to bar in 1980. From 1980 to 1981, Mustapha did the compulsory National Youth Service Corps at the Directorate of Legal Services at the Army Headquarters and was in charge of the review of Court Marshall Proceedings.

After his National Service, he joined Sotesa Nigeria Limited, an Italian consultancy firm, as an Executive Director in charge of Administration, leaving in 1983 to join the law firm, Messrs Onagoruwa & Co in Lagos.

With his law practice in full bloom, Mustapha became a principal counsel in the firm of Messrs Mustapha & Associates. His legal interests and expertise spanned privatisation and commercialisation of public companies and government parastatals. He was also involved in the preparation of various and miscellaneous banking documents such as Debentures, Guarantees, Mortgages, Bonds and Loan Syndications.
 
One of his career highlights was his appointment as a member of the Interim Management Committee of the defunct Petroleum (Special) Trust Fund, serving meritoriously from 2000 to 2007. At the PTF, he was responsible for the production of an up-to-date comprehensive project and programme report, including location, coverage and whether performed, performing or abandoned production of the final information of Assets and Liabilities, examination of the administrative structure and cost-effectiveness of PTF projects and services, among other duties.

Recall that Mustapha also played key leadership roles at the Nigeria Bar Association serving as Social Secretary and Chairman at the Yola branch. Not surprising, therefore, after his stint at the PTF in 2007, he returned to full legal practice and was appointed principal partner at Adroit Lex, a thriving law firm.

With a burning desire to serve the larger society, he was at various times, a member of the Constituent Assembly (1988-1989), ChairmanPeople’s Solidarity Party-Gongola State (1989-1990), State Chairman, Social Democratic Party-Gongola State (1990-1991) and emerged the gubernatorial candidate for SDP in Adamawa state in 1991. He was the Deputy National Chairman of the defunct Action Congress of Nigeria from 2010 to 2013. He was Secretary, APC Presidential Campaign Organization Mobilization (2015) and member, APC Transition Committee (2015). He is also a member, APC Board of Trustees.