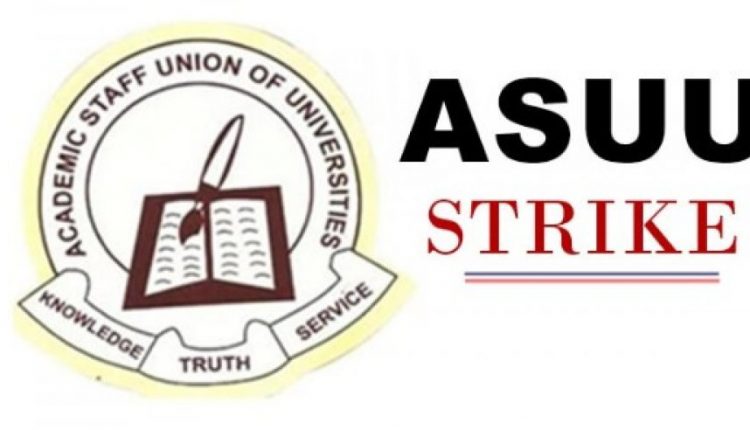 The Academic Staff Union of Universities (ASUU) Alex-Ekwueme Federal University Ikwo Chapter (AE-FUNAI), in conjunction with their counterpart of Ebonyi State University Abakaliki (EBSU) on Wednesday, complied with the directive of the National Body, to protest against  Federal Government continued withholding of members eight months salary.

The Chairperson of the AE-FUNAI Chapter of the Associaion Comrade Ogugua Egwu, and Comrade Ikechuku Igwenyi of EBSU Chapter  led  members of the Association on a peaceful protest at the institution.

Comrade Ogugua Egwu  said that the protest was staged to express the Union displeasure over the Federal Government casualization of lecturers.

“It is important for the world to know that the Federal Government  having not paid lecturers for Eight months, decided to casualize intellectuals by prorating our October, 2022 Salaries”

The AE-FUNAI/ASUU Chairpersons both  reiterated that the Federal Government has declared war on the Public Education System in Nigeria.

“it is absolutely wicked for the Federal Government to insist on withholding the arrears of our salaries not to talk of prorating the October, 2022 salary”

“Most annoyingly, the recently released November, 2022 Salaries have recorded a high degree of amputation and fractionation”

It would be recalled that

It would be recalled that the Academic Staff Union of Universities (ASUU), had on 14th of October, 2022, suspended  their 8-months strike following the intervention of House of Representative Speaker Femi Gbajabiamila and the Appeal Court ruling.

The Strike Action by ASUU was declared on  February 14th 2022.

Insecurity : 80 percent of bandits in Anambra from neighbouring states – Lawmaker