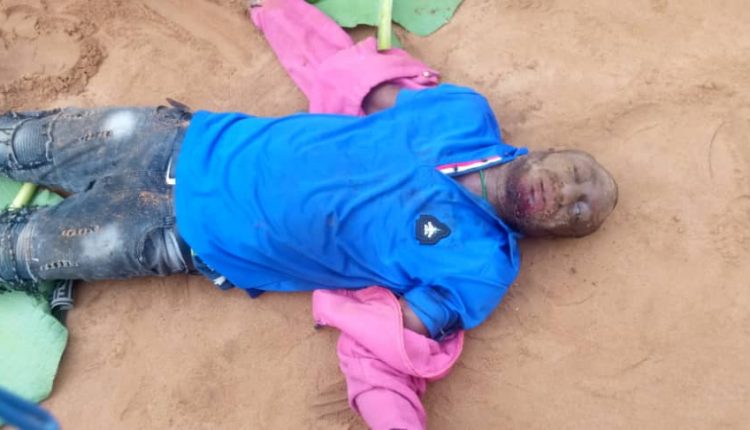 Fielding questions from newsmen while reacting to the invasion, the Ezinkwelle village chairman who is also the caretaker committee chairman of Nkwelle-Ezunaka community, Chief Okafor, said, “I was the
target to be killed because they came through the back, to my house instead of the major road but were repelled by the Ezinkwelle vigilante group from heading to my house to kill me and set my house ablaze for opposing their bid to grab Edoma land which we have part of it in common with Nwobia family in Amuche village”

“Already we have land tuzzle with Merry land estate and the leadership has been boasting that there are about 91 estates in the community of which if they contribute #10, 000 each, it would be enough to
eliminate me.”

“They were about 100 hired thugs on the fateful day, armed to the teeth and because it was night they could not be easily identified.

Since the coronavirus pandemic lockdown they have been encroaching on our land but each time they invaded we repelled them. They have accused me of murder, arrested me and took me to Abuja, state CID and zone 13 but as complainants when asked to come for commencement on the matter they ran away”

Chief Okafor expressed optimism that justice would be given to the invasion now that the matter is before the police hinting that if not for his intervention and plea to the angry youths of the community whose son was killed and another given deep machete cut by the land grabbers, “by now the entire Merry land estate would have been on fire”

The caretaker committee chairman hinted further that he has set up peace/reconcilliation committee and land matters commmittee on assumption of office and accused his Predecessor, Hon. Leonard Areh Onyenze, of not fighting land grabbers to submission within the two years he was the President General of Nkwelle-Ezunaka community but rather he focused only on quelleling and noise-making.

In his contribution, the deceased elder brother ( that acts as his father), Mr. Peter Ejike, while corraborating the view of Chief Okafor that the assailants targeted him (Okafor), hinted that, “if not that our youths challenged the invaders, which on the process my son, Chidozie lost his life, they would have killed Chief Okafor and set his house ablaze because they came with jerry cans of petrol, there were heavy shootings that fateful morning.”

“My plea is for the police to fish out the invaders who killed my son, macheted Ikechukwu Agbata and injured scores, to face justice as justice delayed is justice denied”

In a swift reaction the embattled President General reportedly sacked by the state government, Hon. Leonard Areh Onyenze, who insists he is still the PG, accused the caretaker committee chairman of paving the way for stranger elements to encroach on the community land.

“To buttress my point let Okafor and myself engage ourselves on debate and I will win him because I never sold an inch of land to anybody. The present land grabbing attitude by stranger elements that are encouraged by our youths has now resulted in the death of a youth and scores macheted”

“So on issue of land grabbing I cried about it, I fought about it and I called my people to retrace their footsteps that it is not a means of livelihood but unfortunately they are on it and we will use legal means to cap their excesses and deal with the strangers who encroach on our ancestoral land illegally”, he vowed.

Efforts made to contact the state Police Public Relations Oficer, PPRO, Mr Tochukwu Ikenga, through text message to confirm the incident
proved abortive as he did not reply to the text.

EBONYI STATE GOVERNMENT IS KNOWN FOR TRANSPARENCY IN THE…