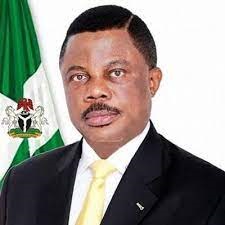 Anambra State Government has advised people of the state to disregard broadcasts by anonymous persons on the social media claiming that the fire at the Plaza Section of the Onitsha Main Market spread for several hours without response from the State Fire Service or the Federal Fire Service in the state.

The state Commissioner for Information & Public Enlightenment, C Don Adinuba in a statement described the broadcasts as part of the ongoing disinformation campaign against the Anambra people by propaganda agents of politicians who lost out badly in the November 6 gubernatorial election which the All Progressives Grand Alliance (APGA), candidate, Professor Chukwuma Charles Soludo, won overwhelmingly.

The statement partly read, “It is regrettable that the small coterie of politicians whom the great Chinua Achebe described as renegades have refused to accept the will of our people and are doing all manner of things to de-market their own state.

“This behavior calls to mind their action in November, 2003, when they burnt down the Anambra Broadcasting Service facilities in Awka and Onitsha, the Governor’s Lodge in Onitsha, Government House in Awka, Anambra House of Assembly Complex in Awka, and Judicial Complex in Awka, all in a desperate attempt to have emergency rule in the state which would see one of them appointed the Sole Administrator in place of the democratically elected governor”.

The Commissioner gave assurance that the renegades would be defeated in their mission as they were done in November, 2003.

He hailed the state fire service for containing fire outbreaks throughout the state in a very professional way.

In a letter of appreciation to the Managing Director of the State Fire Service, Air Vice Marshall Ben Chiobi (rtd), for the prompt response of his agency to the fire at the Onitsha Main Market, Adinuba said that the reaction time of the fire service was superb as well as handling of the fire at the Plaza Section of the internationally famous market exceedingly impressive.

While saying that no life was lost in the inferno, the Commissioner Adinuba added, “despite the fact that the fire started in a place with plenty of combustible materials, your men contained the fire no sooner than it began, making a lot of people in the great commercial city unaware there was such an incident.

“The gallantry exhibited by your men”, observes Adinuba, “is as a result of the overhaul which your agency has undergone in the last three years since Governor Willie Obiano appointed you its Managing Director, provided critical equipment, hired more personnel for your agency, increased allowances to your men considerably and ensured better and regular training for them.

“Agbili’s enthusiasm, passion, infectious leadership and acute professionalism, earned him such nicknames as, Agility, Ability, and Ezeoku which enabled him to become the chairman of the Anambra State Chapter of the Nigeria Society of Engineers (NSE)

The letter maintained that the state fire service has displayed so much effectiveness and efficiency in battling infernos even in filling stations like the one at the Mobil facility in Awka on Christmas eve.

Adinuba further acknowledged the cooperation from sister agencies in the state, like the federal Fire service, Nigeria Police Force and the Nigeria Security and Civil Defence Corps.

According to him, it is the way to go especially in a place where there is cooperative federalism rather than unnecessary and debilitating rivalry among such agencies.