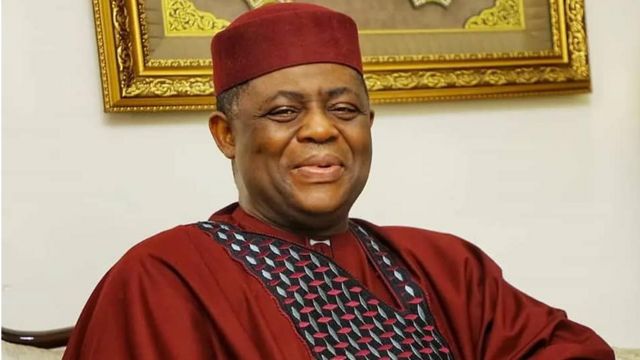 Justice Daniel Osaigor of a Federal High Court in Lagos, on Wednesday, ordered a former Minister of Aviation, Femi Fani-Kayode, to pay N200,000 for not making himself available  for re-arraignment for alleged money laundering.

Osaigor said that he had  gone through the court’s file and noted five different letters by Fani-Kayode  seeking adjournment on same medical grounds.

The court, consequently, ordered that he should pay the sum or risk  revocation of his bail.

The Economic and Financial Crimes Commission, EFCC, had charged Fani-Kayode alongside a former Minister of State for Finance, Nenandi Usman.

Also charged is Yusuf Danjuma, a former chairman of the Association of Local Governments of Nigeria, and a company, Jointrust Dimentions Nig. Ltd.

The EFCC preferred a 17-count charge of N4.6 billion money laundering against them before Justice Mohammed Aikawa.

They had all pleaded not guilty and were granted bail.

Trial had begun before  Aikawa and witnesses being led in evidence before the judge was transferred out of the Lagos jurisdiction of the court.

The case was consequently assigned to Osaigor and the defendants  scheduled for re-arraignment on Wednesday.

When the case was called on Wednesday, Mrs Bilikisu Buhari announced appearance for prosecution.

Buhari then informed the court that on July 15, prosecution asked the court to adjourn the matter for re-arraignment of the defendants.

She told the court that on October 11, prosecution received a letter from the second defendant informing them that he had been given bed rest.

Buhari told the court that letters by the second defendant had become numerous, saying that he wrote them to avoid attending court sittings.

“Whenever he doesn’t want to attend court, this is the type of letter we get,” she said.

However, Fani-Kayode’s counsel, Ajudua, told the court that although his client’s  illness was recurring, he had  attended court regularly.

He urged the court to grant an adjournment in favour of his client.

At this point, the judge decided to go through the court’s file and  discovered that Fani-Kayode sought a similar medical excuse five times.

The judge asked his counsel to take one of two options:  revocation  of Fani-Kayode’s bail or to imposition  of N200,000 fine to be paid before the next adjourned  date.

The counsel chose  the fine option.

In a short ruling, the judged court held: “From my records, the second defendant had written to the court five times, excusing his trial on medical grounds.”

“The second defendant is to pay a cost of N200,000 before the next adjourned date, as the recurring medical excuse has been a pattern that slows this trial,” he said.

He adjourned the case until November 30 for re-arraignment of the defendants.

The EFCC has alleged that the defendants committed the offences from January to March 2015.

In counts one to seven, the EFCC alleged  that they unlawfully retained over N3.8 billion which they reasonably ought to have known formed part of  proceeds of  stealing and corruption.

In counts eight to 14, the defendants were alleged to have unlawfully used over N970 million which they reasonably ought to have known formed part of corruption.

In counts 15 to 17, the EFCC said that Fani-Kayode and one Olubode Oke, who is at large, made cash payments of about N30 million, in excess of the maximum amount allowed by law.

Besides, Fani-Kayode was alleged to have made payments to one Paste Poster Co (PPC) of No. 125 Lewis St., Lagos, in excess of the maximum amount allowed by law.