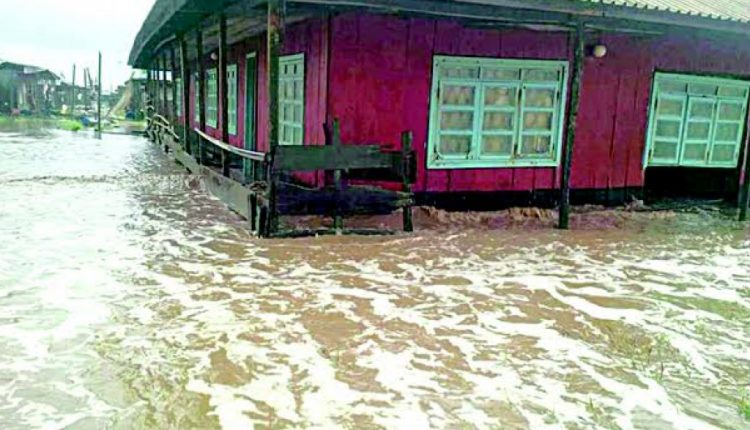 An environmentalist, Kolade Benson Omoyeni, has called for immediate intervention in the flooded Aiyetoro Community in Ilaje Local Government Area of Ondo State.

He expressed fear that the erstwhile socialist community might be washed off as a result of incessant ocean surges if the government at all levels and other relevant authorities delayed in rescuing the community.

This was contained in a statement by Omoyeni and made available to Daily Champion on Sunday in Akure, the Ondo State capital.

According to him, flooding had destroyed the architectural and economic buoyancy of the community.

This development he ascribed to oil exploration activities of oil companies in adjoining communities.

Lamenting the level of destruction of the community, Omoyeni said”the oil companies carry out exploration in the communities surrounding Aiyetoro without acceding to international standard practice

He said”They carry out their exploration activities without recourse to global environmental protection laws.

“This is the same inhuman attitudes of the multinational companies in the whole of the Niger Delta. Black soots are threatening the existence of most oil host towns from Bayelsa to Ondo while the Petroleum Industrial Act (PIA) cares very little (even in theory) about the continuous reckless damaging of the riverine areas and lands”

Omoyeni said the economy of the host communities in the Niger Delta region was lamed by the crude activities of the oil companies.

He, therefore, called on environmentalists, governments and the Ondo State Oil Producing Areas Development Commission (OSOPADEC) and Niger Delta Development Commission (NDDC) to save Aiyetoro community from being sunk by incessant ocean surge by ensuring the immediate implementation of abandoned intervention projects awarded for the same purpose.

The Environmentalist warned that if the community is neglected to be washed away by ocean surge, several communities in Ilaje Local Government Area would suffer the same fate.