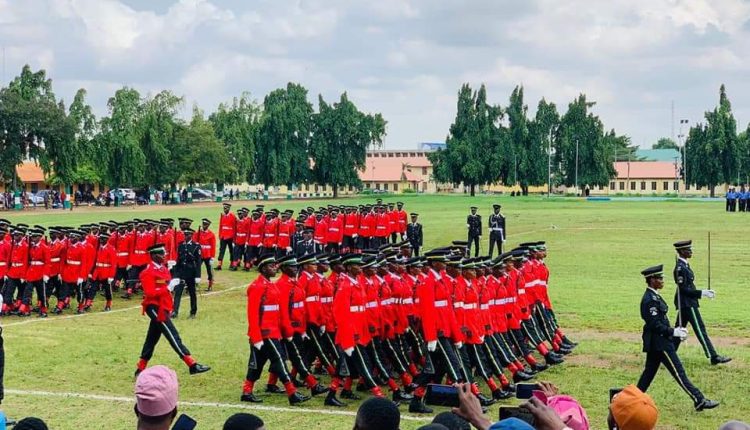 The Nigeria Police Force has passed out a total of Nine Thousand, Nine Hundred and Eighty-Nine (9,989) Police Constables of the 2020 batch of 10,000 Police Recruits on yesterday from Four (4) Police Colleges and Twelve (12) Training Colleges nationwide.

The Police Constables who have undergone Six (6) months intensive and rigorous training in basic, intermediate and advanced police studies, have engaged in physically exerting and intellectually challenging training activities that were carefully designed to transit the recruits from civilianship to professional police officers with the right orientation to meet the challenges of policing an increasingly democratic and rule of law-driven Nigerian environment.

The IGP said the recruitment and training represents another huge step in the drive by the Federal Government to change the narratives of Policing by addressing the age-long manpower gap that has been inhibiting optimal police service delivery in this country.

The manpower drive equally aims to meet and possibly surpass the United Nations (UN) recommendation of one (1) policeman to four hundred (400) people.

The IGP appreciated President Muhammadu Buhari and Chairman Nigeria Police Council for the approval of recruiting 10,000 Police Constables into the Force yearly, and his determination to restore the lost police primacy by bequeathing to our beloved country a reformed and well-positioned Police Force with renewed capacity and commitment to attain its internal security mandate.

The IGP similarly lauded the Honourable Minister of Police Affairs, Alhaji Mohammed Maigari Dingyadi, as well as the Chairman and Commissioners of the Police Service Commission for the strong support and synergy which has aided in ensuring that the recruitment exercise is undertaken in the most transparent and efficient manner.

According to the IGP, Eleven (11) of the 10,000 Police Recruits who commenced the training could not meet up with components of the standards set for exercise in the course of the training hence they could not pass out as Police Constables.

He noted that shortly after this passing out parade, another set of ten thousand (10,000) recruits will be resuming training under the 2021 batch of the exercise.

In his final remark, the IGP sounded a note of warning to the newly passed out Police Constables, who will be posted to their respective Local Government Areas for police duties, that the bedrock of policing is discipline, emphasizing that their success as Police Officers is entirely dependent on the quality of their character, discipline, and professionalism.

Force Spokesman, CSP Olumuyiwa Adejobi in a statement said that he admonished them to resolve not to engage in any act that will be unedifying to their good name, that of their families, and indeed the Force as they commence their policing career today.

The IGP assured citizens that a new Police is being evolved to protect Nigerians with courage and serve them with compassion.

Meanwhile, as part of the commitment of the Federal Government to meet the manpower needs of the Police, the  Nigerian Police, has graduated 1,087 General Duty  recruits  constables at the Maiduguri Police College under the 2020 General Duty Recruit Constable, as part Federal Government effort to meet the manpower needs in curbing insurgency, crime and criminalities.

Speaking at the  graduation ceremony if the General Duty recruit  Constables Pass Out Parade on Wednesday at the Police College, Maiduguri, the Inspector General of Police,( IGP) Usman Alkali said ” it is my pleasure to welcome you all to this ceremony, which  marks the Passing out Parade (POP) of police recruit under the tear 2020 batch of the recruitment drive”.

The IGP who was represented by the Deputy Inspector General of Police, DIG Zannah Ibrahim said “the ceremony involves a total of 9,989 recruits out of the 10,000 that commenced the training as a total of 11 recruit trainees could not meet up with the components of the standards set for exercise during the trainings”.

The IGP said the exercise was taking place simultaneously at  15 other  police training institutions across the the coutry, marks joyful climax of the physically exerting and intellectually challenging training activities.

IGP Alkali further said “indeed, I am elated to note that shortly  after the  POP bring witnessed today, another set of 10,000 recruits will be resuming training under the 2021 batch of the exercise.

He said the recruitment exercise projects the determination of the Federal Government to  not only create employment to the teeming youths but also to address the social factors that accentuate the commission of crimes .

Also speaking, the chairman, Borno state Career Guardians and Council , Abba Lawan said  the Council has been doing it’s best to see that Borno fill all its quota in the police, military, other sister security agencies and civil service in general.

In his vote of thanks the Acting Commandant, Maiduguri Police College, DCP Onuiha  Bethrand   said since January, 2022 when the exercise commenced they didn’t witness any causality..

He thanked the IGP, Usman Akali, minister of Police Affairs’, Mohammed Dingyadi  for their strategic mentorship, as well as President Muhammadu Buhari for his strategic support.