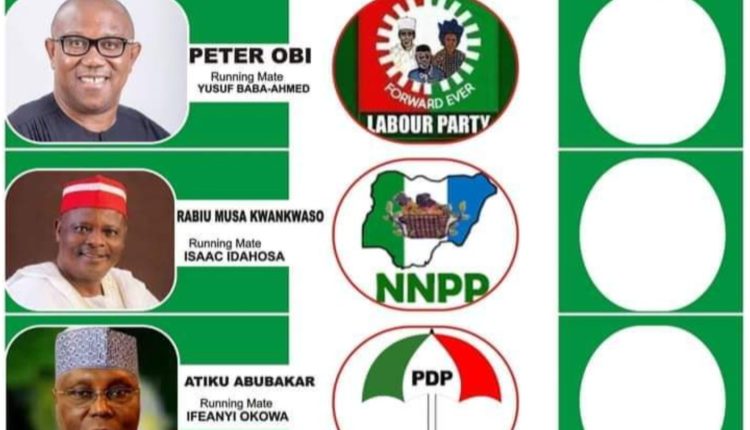 The Independent National Electoral Commission, INEC has published the names of 18 candidates and their deputies cleared for the 2023 presidential election.

INEC  also said that the list of candidates for the state governorship and State Assemblies election will be published on October 4, 2023.

In a statement by the National Commissioner and Chairman, Information and Voter Education Committee, Festus Okoye, the Commission said the list was published in pursuant to section 32(1) of the Electoral Act 2022 and item 8 of the Timetable and Schedule of Activities for the 2023 General Election.

“The publication of the full names and addresses of all nominated candidates follows the political parties’ conduct of primaries and completion of the nomination exercise. Nigerians may recall that at end of the process, the personal particulars of all nominated candidates were displayed in their constituencies nationwide as provided by section 29(3) of the Electoral Act.

“Subsequently, validly nominated candidates had the opportunity to voluntarily withdraw their candidature by notice in writing and personally deliver such notice to the political party that nominated them for the election. Thereafter, political parties substituted such candidates under section 31 of the Electoral Act for which the last day was 15th July 2022 for national elections and 12th August 2022 for State elections as clearly provided in item 6 of the Commission’s Timetable and Schedule of Activities. Thereafter, no withdrawal or substitution of candidates is allowed except in the event of death as provided in section 34(1) of the Electoral Act or pursuant to an order of a Court of competent jurisdiction.

“The list published today contains the names of candidates validly nominated for national elections at the close of party primaries and the period earmarked for withdrawal and substitution of candidates. The final list of candidates for State elections (Governorship and State Constituencies) will be published on 4th October 2022 as already indicated on the Timetable and Schedule of Activities for the 2023 General Election.

“We note the fact that not all the political parties conducted primaries in all the constituencies, submitted the particulars of candidates that emerged from valid primaries or substituted their candidates after fresh primaries within 14 days as provided in section 33 of the Electoral Act. This has led to numerous litigations, some of which are ongoing. Where the Commission was served with Court orders by aggrieved aspirants or candidates before the publication of this list, these have been indicated under the remark column.

“The list for specific constituencies is published in each State where they are located while the comprehensive nationwide list has been uploaded to the Commission’s website.

“We appeal to all political parties to channel any observations on the list of candidates to the Commission and such must be signed by the National Chairman and Secretary of the political party and supported with an affidavit as provided in section 32(2) of the Electoral Act 2022.”

Meanwhile, the Edo State Governor, Mr. Godwin Obaseki, has called on political leaders across the country to step up and assuage the pains of Nigerians on many fronts due to poor governance and inefficiency or expect a surprise from the electorate in the forthcoming 2023 general elections.

Obaseki, while speaking to journalists in Benin City, noted that Nigerians are fed up with the inefficiencies and failures of government officials and other representatives and will reject the same if nothing is done to change the narrative.

He said the people are closely watching the political situation in the country and are ready to shock political parties with their new political orientation.

Obaseki stated, “I am sure that we are all watching the development in the country very closely, particularly the evolving political development. It’s clear now that Nigerians are getting fed up with the government and those that represent them in government. We can see that in their reactions in social media and where their actions and emotions are headed.

“For us as a government and representatives of our people, we would be hurting ourselves if we ignore the changes that are coming and believe that things are still the same. We will all be shocked as we are beginning to see.

“People are now beginning to realise that they need to demand more from people in government and those managing their resources and commonwealth; people will go out to vote their choice or interests.”

He added, “No political party today can beat its chest and say they will win or have a clear victory in the next election in the country.

“People are watching and the only reason why people will leave their houses to polling units is because there is a reason to either vote for or against something. If they have not benefited, they are not likely to come out on Election Day.”

The governor further warned, “People will ask questions saying: you have not done what you promised us, you have not delivered; people will react. Nobody will be spared. The new group will come in and will not spare the civil servants; they will put pressure on them and politicians will be kicked out of office.

“We are lucky in Edo State because we saw it coming and have laid down the roadmap and anticipated it coming but our challenge is that many people don’t believe it, thinking we have time and things will still happen the way they usually do.”

2023:You’re Desperation To Remain In Power Through Back Door Is Death On Arrival-PDP Tackles Lalong, APC