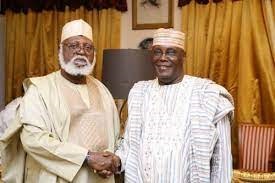 .As Abdulsalam warns against hike in fuel pump price

.No decision yet on fuel subsidy removal–NEC

Ahead of next year general elections, statesmen led by the former Head of State, Gen. Abdulsalami Abubakar converged on Abuja on Thursday to analyze issues of politics, economy and insecurity bedeviling the country.

According to the statesmen, the issues of economy, insecurity needed to be properly addressed before the elections.

Taking turns to speak at the 19th Daily Trust Dialogue held in Abuja, they all agreed that dialogue becomes the only way to solve the country’s problems.

The Sultan of Sokoto, Muhammadu Sa’ad Abubakar, in his remarks emphasized on dialogue as he said, “Dialogue solves every problem. What dialogue cannot solve no amount of weapon can. We must not get tired of talking to one another and in a forum like this we bring the attention of our leaders to what is happening.”

The religion and traditional leader said politics was too important to be left in the hands of politicians alone.”

He cautioned leaders not to be angry when they criticized.

Similarly making his remarks, the former Vice President, Atiku Abubakar cautioned the leadership of various ethnic nationalities across the country to watch their utterances and actions as the 2023 general elections approach.

The Presidential candidate of the Peoples Democratic Party (PDP) in 2019 said all issues could be solved through dialogue and understanding as “this is a delicate point in the history of this country”.

He said: “Again, let me also comment on the issue of the ethnic nationalities who try to put obstacles, like Baba-Ahmed said, making it ungovernable in certain parts of the country. I think what we need to do definitely as he recommended, there is need that we lower the temperature. And what is so disappointing about this, all these ethnic nationalities are being headed by people who are supposed to be very well educated. And this is the disappointing part of it. I also believe that it is solvable. It is solvable only through dialogue and understanding. So, this is a delicate point in the history of this country. And we must be very, very cautious on how we actually approach these issues, particularly in an election year between now and the 2023 elections. So, let me pause here and say that I have been actually ambushed to make those comments.”

He attributed the failure to provide compulsory free education from primary to secondary school level to corruption, stressing strong leadership that was desirable to tackle the education challenges.

“I have listened to contributions so far about education, unemployment, poverty and the causes of what we are going through today. Of course, these are correct and the right thing; identifications of our challenges, but, the major constraint to these challenges is what was highlighted by the governor of Borno State, and that is corruption. Let me relate my experience in governance, we established the Universal Basic Education (UBE) and Education Tax Fund (ETF). “And all this money is being channeled to the states and local governments to provide compulsory education for every child up to secondary school. Compulsory education for every child is a must. Do we do it? Do the states and the local governments do it? We know that they don’t. Why? corruption. So, I believe that a leadership that can come and really show strong leadership on that issue, particularly of education is desirable.”

However, the Chairman of the occasion, former Head State, Gen. Abdulsalam Abubakar (Rtd) has warned that petrol price increase will push more Nigerians into poverty.

According to him, Nigerians are on the verge of paying more for petrol following the recommendation of the National Economic Council (NEC) that pump price should be pegged at N302 per litre.

He, howeve,r warned against that as he said, “Insecurity in the country is worsened by our dear economic situation. Unemployment and underemployment remain at the high level. Over 18 million Nigerians are still caught up in needless poverty. All of these tend to have negative effects on security. In fact, Nigeria now faces a full security crisis that is confounded by the COVID-19 global pandemic and the banditry in many states in Northern Nigeria.

“Most of these have disrupted the final value change across the country and negatively impacted the ability of Nigeria to produce, process, and distribute.

“There is a continuous rise in the prices of food items beyond the reach of many Nigerians. On top of all these, fuel prices are expected to rise significantly in the coming months as announced last November. We all know that when this happens, it will push many millions of Nigerians into poverty.”

He also spoke on other challenges confronting the country, saying security forces have been overstretched.

“Ladies and gentlemen, Nigeria is once again at crossroads. Insecurity remains the single, most difficult challenges for the country. The Boko Haram insurgency in the North East, banditry in the North West, violence in the South East, kidnappings and abductions of travelers across many states all continue to fester in the land.”

“In addition to these, ethnic, communal and religious conflicts are rearing their head very hardly again in many parts of the country. All of these have greatly challenged and overstretched our security forces. This has caused thousands of deaths and millions of internally displaced persons in the country over the past years”.

On his part, the governor of Borno State, Prof. Babagana Zulumu lamented on the decay of the educational system.Zulumu said the failure in educational system had affected every facet of the economy, which had led to insecurity.

Speaking, he said, “education is one of our major problem, the one we have now is of concern.”

According to him, the schools have teachers that cannot read nor write, as this affects the learning of the students.

The Borno state governor, who said he is not aspiring for higher position, said the country must be resilent to tackle insecurity.

He said, “l am not aspiring for any higher position, as l am not rooting for anybody. We must select leaders base on competency. We have to come together to do this, what matter is the future of Nigeria.”

However, The National Economic Council, NEC, said Thursday that it was yet to take any decisions on the proposed removal of petroleum subsidy.

“No! NEC hasn’t come up with any decisions yet,” Governor of Edo State, Godwin Obaseki said while  briefing newsmen on the outcome of the monthly NEC meeting held at the Banquet Hall of the Aso Rock Presidential Villa, Abuja.
Recall that President of the Senate, Ahmad Lawan, had on Monday told newsmen at the Aso Rock Presidential Villa, Abuja that President Muhammadu Buhari had not asked anybody remove fuel subsidy.
He spoke amid speculations that government was contemplating a hike in fuel price.
Earlier, the Minister of Finance and National Planning, Zainab Ahmed has announced that subsidy was provided for only up to June in the 2022 budget.
According to Obaseki, an adboc  committee headed by Kaduna’s  Governor Nasir El Rufai was set up by NEC to advise on how to deal with the cost of premium motor spirit, PMS, in the country, as he noted that Nigeria is selling at half the cost of the product compared to the price in neighbouring countries.
The report of the committee, he said, was yet to be discussed by NEC for implementation.
He said: “As you all know and aware, the issue of subsidy has been one matter that NEC has deliberated on for more than a year now. There was an adhoc committee which was set up by NEC headed by Governor El-Rufai that included members of the executive arm of government, that worked on recommendations as to what we should do about the cost of PMS locally; because as you realize, as has been told us, the cost of PMS in Nigeria today is about N162 per liter, whereas every other country surrounding Nigeria is selling the same product at more than 100% of the cost in Nigeria.
“And the country as at last year, spent in excess of almost I mean, we need to have the exact figures, but we must have spent almost N2 trillion subsidizing petroleum products. That is money that could have gone into building roads, money that could have gone into healthcare and education.
“So for NEC, the arguments have been put out, should we continue this regime of spending money? We do not have to subsidize the living standards of only mostly those who have vehicles. And  when NEC looked at some of the analysis last year, we then realized that less than 1/3 of the states of this country consume two thirds of the subsidy.
“So the issue of equity also came up. All of these findings were presented to NEC and NEC has had several deliberations. And the deliberations are still ongoing. So, no! NEC hasn’t come up with any decision yet.
“I think recommendations have also been made to the President. That is what I am aware has transpired so far.”
Also commenting on the issue during the news briefing, Nassarawa Governor, Abubakar Sule said presentation on the issue of subsidy was not made by NEC because a decision was still pending.
According to him, the fact that subsidy had been provided for only six months in the current budget would suggest that the Nigerian National Petroleum Corporate,NNPC, would have fully taken charge by June in accordance with the provisions of the Petroleum Industry Act.
“I think in addition to that what you have to understand, we didn’t make any presentations on this because there has not been a decision. But in reality, all of us Nigerians know that there is now the Petroleum Industry Act. And NNPC has now become, you know, a limited liability company. So NNPC will run differently.
“So if the Minister of Finance, you know, provides for six months, you probably can understand part of the reason for provision of six months before NNPC fully takes off and at that moment, that’s when decisions will be made.
“But I want to make the correction that it is not governors who are making recommendations. It is actually a NEC committee, you know, which comprises of all the other people that are looking at this and no decision has been made and probably by the time a decision will be made, uou know, the Petroleum Industry  Act has fully taken charge, and it will not require any recommendation from anybody,” the governor said.
On how subsidy deductions have been affecting the fortunes of the states, Governor Obaseki said:
“Well, I’ll put it very succinctly. As at last year, NNPC was supposed to contribute N200 billion a month to FAAC for distribution to the States.  Because of payment of subsidy, NNPC is unable  to put that money into FAAC for distribution, which means less money going to the States and less money going to the Federal Government.”
Continue Reading
2023: Address economicAbdulsalamAtikusecurity challenges  before electionsSultan tell FG
25
Share FacebookTwitterWhatsAppPinterestEmailFacebook MessengerLinkedinTelegram