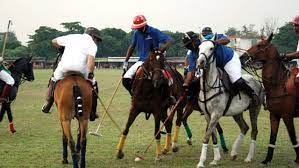 As the countdown begins for the much anticipated National Polo Tour for the 2022 / 2023 season, Katsina Polo Tournament, traditionally one of the openers, has been postponed indefinitely.

The annual epoch festival hosted by the Emir of Katsina and Life Chairman, Nigerian Polo Federation, Alhaji Abdulmimuni Kabir Usman, a statement by the tournament committee of the Katsina Polo Club indicated, was suspended sequel to the royal father’s ill – health.

The terse statement reads in part: “The suspension followed  review of the health condition of His Royal Highness, the Emir of Katsina,” adding that “the club deemed it uncomfortable to host the tournament while His Highness is still recovery in hospital.”

The club regretted any inconvenience the suspension may cause polo lovers across the country.

Recall that the regular polo season opening tournament at Usman Nagogo Polo Ground in the ancient city of Katsina draw participants from the business world and aristocratic families in Kaduna, Zaria, Sokoto, Abuja, Bauchi, Minna, Jos, Maiduguri among others.

The popularity of the polo fiesta, investigation revealed, stemmed from not only the love and passion of many in the ancient city for the team sport but also the laurels for grabs which include Nigerian Cup, Gen. Hasssn Katsina Cup, Talba Cup and Coomassie Cup.

colour to the promotion of the game.

Flooding in several states and the triple response structure by Presidency