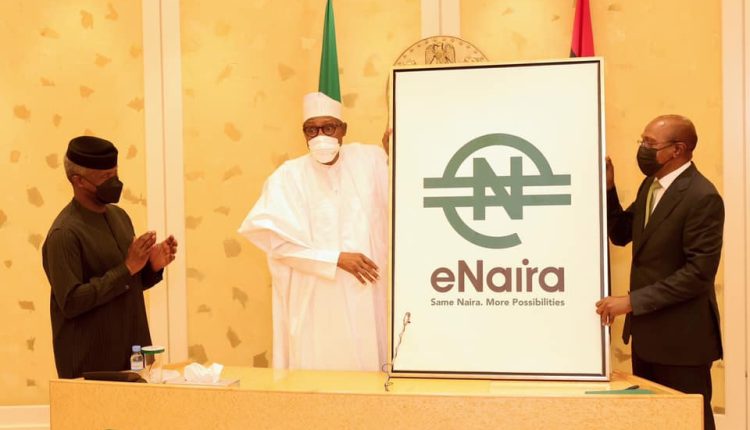 The eNaira stock wallet belongs solely to the CBN and it shall warehouse all minted eNaira.

Following the launch of the eNaira by President Muhammadu Buhari, the application for the digital currency introduced by the CBN has become available for download, with more than 5,000 downloads within hours of the launch.

This is as the apex bank released regulatory guidelines which stipulate that charges for transactions that originate from the eNaira platform will be free in the first 90 days commencing from October 25.

After this period, applicable charges as outlined in the Guide to Charges by Banks, Other Financial and Non-bank Financial Institutions will become effective.

According to the regulatory and issuance guidelines, banks will automatically be onboarded by the CBN while merchants will be onboarded once they download the app and individuals will have to onboard by themselves.

READ ALSO: Five things Nigerians can do on the new website

The guideline revealed that there would be different wallets for different stakeholders.

“The eNaira stock wallet belongs solely to the CBN and it shall warehouse all minted eNaira,” the guideline stated.

It said that financial institutions were expected to maintain one treasury eNaira wallet to warehouse eNaira received from the CBN eNaira stock wallet.

“The eNaira branch sub wallet shall be funded from the treasury eNaira wallet.

To ensure security of funds, the eNaira is expected to have two-factor authentication and other measures.

Meanwhile, daily transaction limits for Tier 0, which is just phone number without verified National Identity Number, was set at N20,000 with a balance limit of N120,000.

Tier 2 and Tier 3 categories have daily transaction limits of N200,000 and N1 million as well as a N500,000 and N5 million balance limits, respectively, while merchants have no limit.

According to a circular signed by Mr Chibuzo Efobi, the CBN director Financial Policy and Regulation Department, the eNaira will compliment cash as a less costly, more efficient, generally acceptable safe, and trusted means of payment and store of value.

“The guidelines seek to provide simplicity in the operation of the eNaira, encourage general acceptability and use, promote low cost of transactions, drive financial inclusion while minimizing inherent risks of disintermediation or any negative impact on the financial system,” it reads in part.